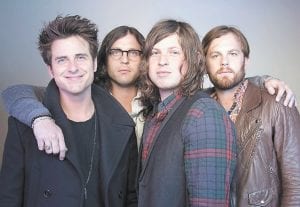 Members of the band Kings of Leon, from left, Jared Followill, Nathan Followill, Matthew Followill and Caleb Followill, posed for a portrait in New York on Oct. 21. (AP Photo/Victoria Will)

The Kings of Leon took more than musical cues when they opened a concert tour for U2 a few years back. They learned that ambition isn’t a dirty word.

That lesson is clearly evident on “Come Around Sundown,” the rock band’s first collection of music since the hits “Sex on Fire” and “Use Somebody” made them Grammy-winning stars. The album cover’s palm trees recall the Eagles’ “Hotel California” (16 million sold) and the music inside is epic and inviting.

“If the world is looking for a big band from our generation, we at least want to give it a shot,” said 28-year-old singer Caleb Followill, one of three brothers and a cousin in the group named for his grandfather. “We’ll put ourselves up there against anyone because we’re very competitive and we’re family. Yeah, we’ll give it a shot. I’m not afraid to at least try.”

The admission cuts against the grain of an ambivalence toward success that has run strong in the rock ‘n’ roll world — coinciding with its diminished influence as a force in popular culture — and the Kings’ own wrestling with good fortune.

The Beatles and Elvis Presley never thought twice about wanting to be big stars. The attitude is diff erent today, perhaps dating to Bruce Springsteen’s pulling back from his “Born in the USA” stardom and, especially, the suspicion that Pearl Jam and Nirvana felt about popularity. An underground ethos took hold. Most rock artists prefer being part of a subculture and don’t make the effort to break through to a wider audience, said Brian Hiatt, senior writer at Rolling
Stone
magazine.

“It has kind of messed with fans’ heads and confused fans about what is acceptable and what is not,” he said. The quality of work almost doesn’t matter; many fans will simply dump a band when they become popular, he said.

For four albums, the Kings of Leon were underground darlings in the United States, with more mainstream appeal overseas. Things changed with the “Only by the Night” disc in 2008. Buoyed by the hit songs, it sold north of 6 million copies.

That messed with the Nashville, Tenn.-based band’s heads. Followill told Spin
magazine that they got bigger than they wanted to be. “You feel like you’ve done something wrong,” he told the magazine in December of last year, in a quote he’d live to regret. “That woman in mom jeans who never let me date her daughter? She likes my music. … Not cool.”

Kings of Leon were approached to have their music covered on the Fox television musical series “Glee” and turned down the opportunity.

Hiatt can see where the band is coming from.

“If you want to be a rock star, you have to keep your credibility,” he said. “You need to be offending someone.”

Followill acknowledged this week that the popularity initially scared him, making him wonder if he had lost his edge. That’s when he thought back to his time spent with U2 — one of the few remaining rock bands that can fill a stadium yet remain a creative force.

It’s not a bad life, traveling to gigs in plush jets instead of drafty vans.

“You have to step up to the plate and say, ‘All right, do I have it in me to be one of the biggest bands?’” he said. “Even though that’s a lofty goal, you have to come to terms and say, ‘Can I take the pressure?’ We all agreed that we could. There are definitely times where we are secondguessing and wondering why we thought that because there is so much negative that comes along with the positive. People are going to hate you and people are going to want to see you fail because you reach a certain level.”

Any remaining selfdoubt wasn’t evident in the music. Kings of Leon don’t fall prey to an indie rock small sound, esoteric for the sake of being so. Guitars soar — U2 is a handy reference point here, too — but Followill’s distinctive rough croon prevents edges from being smoothed away.

Yes, there are naysayers. The website The Zeitgeisty Report seemed visibly angry at the size of the bandwagon: “They’ve become the band that vacuous idiots and bimbos think is ‘edgy’ only they’re anything but now.”

But initial reviews have leaned positive.

“They’ve made an album with an old-fashioned commitment to greatness, a determination to fashion something bold and original,” wrote Neil McCormick in the Telegraph
newspaper in Britain, where the Kings are seeking their third No. 1 disc.

Reaching the same spot here is a goal they may reach this week. It’s no coincidence the Kings released “Come Around Sundown” a week before Taylor Swift dropped her new disc.

The Followill brothers — Caleb, 31-year-old Nathan and 24-year-old Jared — grew up as the sons of a fundamentalist Christian minister who traveled around the South. They sought bigcity energy in recording the new disc in New York. The band, which also includes cousin Matthew Followill, 26, tends to kick around musical ideas in sound checks or in the studio, with Caleb retreating to write lyrics when they settle on a tune they like.

Caleb’s particularly proud of the song “Back Down South,” where the band invited friends to sing and add a fiddle. It illustrated the strengths of using the studio as an instrument of experimentation, an approach he’d like to expand upon in future recordings.

Their father resisted rock ‘n’ roll when his sons were growing up, Followill said, and now he’s one of their biggest fans. Caleb is also pleased to be making something of the family name. Before, Followills mostly were known for painting houses.

“We’ve still got a lot of family painting homes,” he said. “But they’re wearing Kings of Leon T-shirts while they’re doing it.”