Kip Winger is much more than frontman of rock band 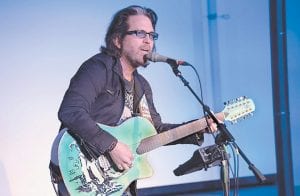 Musician Kip Winger will perform a solo acoustic show at Summit City in Whitesburg on Thursday night. Winger has performed with a diverse group of artists including Bob Dylan, Alice Cooper, The Who’s Roger Daltrey, Neal Schon of Santana and Journey, the Tucson Symphony Orchestra and the Alan Parsons Project, for which he handled lead vocal duties for the Alan Parsons Live Project.

Multi-platinum recording artist Kip Winger, best known for his success with Winger and his early days as a bass player with Alice Cooper, will perform in concert Thursday night (April 30) at Summit City in Whitesburg for a solo acoustic show. Admission is $25.

After a successful run with Winger, Kip built a studio in the hills of Santa Fe, New Mexico in 1995 and started writing and producing music without limits.

“It was incredibly freeing to connect to music without any preconceived ideas about what it needed to be or what niche it needed to fill.”

It is in Winger’s solo work that he has been able to exercise the breadth of his talents as a composer. London’s Classic Rock Magazine called him “one of the most gifted composers and arrangers in the rock genre” and praised his “compulsion to experiment.”

Over the years Winger has continued to pursue his interest in composition. He patterned his course of study after the intensive one-on-one relationships favored by many composers He sought out such masters as Edgar Grana, who holds a Master’s from Juilliard, and currently teaches composition at the School of Visual Arts in New York City; University of New Mexico Professor of Theory and Composition, Richard Hermann; and Professor Michael Kurek from the Blair School of Music at Vanderbilt University. Professor Kurek has praised him for his “great ear and innate musical sensitivity” resulting in “beautifully crafted phrases and nuance.”

Aside from his solo acoustic shows and touring with Winger, Kip Winger was the lead singer for the Alan Parsons Live Project. He has performed or recorded with stars including Alice Cooper, Mark Farner, Roger Daltrey, Neal Schon (Santana and Journey), and Bob Dylan.

In 2009, the Tucson Symphony Orchestra become the first orchestra to perform a Kip Winger composition with the world premiere of Ghosts on the Master- Works Chamber Orchestra Series. The San Francisco Ballet’s debuted Ghosts in 2010.