Kiss ‘can still bring it’ 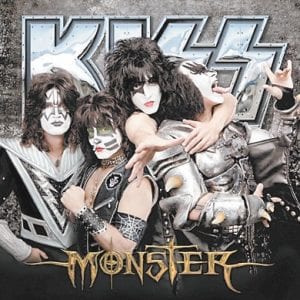 The cover of “Monster,” the new album by KISS.

Nearly 40 years after first slapping on the makeup, donning the costumes and changing forever the way a live concert is performed, Kiss can still bring it.

“Monster” is the caped crusaders’ 20th studio album, and one that fans of old school ‘70s classic rock will be just as comfortable with as those who cut their teeth on later material.

It opens with a bang in “Hell or Hallelujah,” a fast-paced rocker that could be the band’s best concert opener since “I Stole Your Love,” way back in 1977 (though they put it in the middle of the set this summer).

Imagine a mash-up of “Helter Skelter” and Kiss’ 1992 track “Spit,” and you’ve got “Wall of Sound,” a dramatic, ground-pounder. “Freak” uses a grungier distorted sound to showcase the band’s longstanding philosophy of not caring what anyone else thinks of them. And “Back To The Stone Age” features Eric Singer’s pounding drums with a beat reminiscent of the Stones’ “Live With Me.”

This is guitarist Tommy Thayer’s second studio album with Kiss since replacing Ace Frehley in 2003 (and completely stealing his musical identity to the point where the FBI should have been notified). His first outing, 2009’s “Sonic Boom” LP, was marred by rampant theft from Frehley’s classic solos.

This time, Thayer restrains his most larcenous impulses. These solos won’t make anyone forget Eddie Van Halen or Randy Rhoads, but at least most of them are his.

Things bog down somewhat on tracks in the middle of the disc, but finish strong on “Last Chance,” propelled by an AC/DClike

“Thunderstruck” chant. This album isn’t “Destroyer” or even “Love Gun,” but it’s still worth having.

CHECK OUT THIS TRACK: “Right Here Right Now” is available only on iTunes or on a Best Buy version of the album, but it should have made the full album cut; it’s better than at least half the tracks on the album.