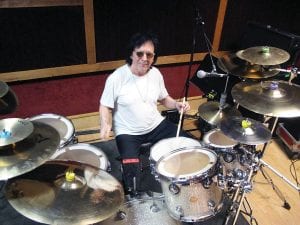 In this June 15 photo, drummer and vocalist Peter Criss rehearsed in a New York City studio for his final U.S. performance held on Saturday, June 17. The co-founding member of Kiss best known for the hit single “Beth” says he wants to leave the stage on his own terms after a series of unhappy endings with Kiss. (AP Photo/Wayne Parry)

No longer playing with the boys, the co-founder of the rock group Kiss and co-author of its hit single, “Beth,” has retired from the concert stage after a show that let him say goodbye on his own terms.

It’s his way to purge the bad taste left in his mouth by a series of unhappy endings with Kiss, including the band’s 2014 induction into the Rock and Roll Hall of Fame, where quarreling over which lineup would perform at the ceremony ended up with Kiss not playing at all.

On Saturday, Criss played what he says is his last U.S. concert at The Cutting Room, an intimate venue in Manhattan where he performed a mix of Kiss classics, his own solo material, and covers he always wanted to perform live but was told by Gene Simmons and Paul Stanley, “We don’t do that; it’s not Kiss.”

“I want to leave the stage happy,” Criss said. “I got onto the stage not thinking about making a buck. It was just pure: Play drums, have a good time, meet girls, travel and get out of Brooklyn.” 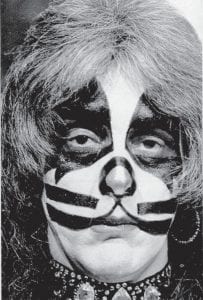 Criss, 71, formed Kiss with Stanley and Simmons and guitarist Ace Frehley in 1973. Within two years the album “Alive!” captured the essence of the makeup and costume-wearing, bomb detonating, blood spitting musical circus that was Kiss, and spawned one of rock’s all-time classic anthems, “Rock and Roll All Nite.”

But drugs and alcohol helped cut short Criss and Frehley’s tenure with the band until a 1996 reunion that was the year’s highest grossing tour. By the end of a co-headlining tour with Aerosmith in 2003, Criss said, “There was bad blood with us again.” The morning after the last tour date in California, Criss said Simmons, Stanley and guitarist Tommy Thayer, who replaced Frehley, “were leaving on our jet, a G-5, and they booked me on a commercial jet at 7 o’clock the next morning. And I hit the ceiling.”

His wife Gigi booked Criss his own jet for the trip home to the New Jersey shore, where bad feelings festered for more than a decade. Even Kiss’s long awaited induction into the Rock Hall in 2014 couldn’t end on a harmonious note.

“I wanted to play so bad that night, and I know Ace Whiskered feline Peter Criss of the hard rock quartet Kiss showed off the results of hours of make-up time prior to a performance in Hartford, Conn., on February 18, 1977. The trademark faces did not change from show to show. (AP Photo/Richard Drew)