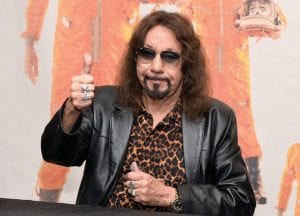 Ace Frehley, founding guitarist of the rock band KISS, is seen in this late 2018 photo. He will perform at River Park in Whitesburg on Thursday, May 2. (AP Photo)

For people of a certain age, the names of some rock legends resonate like a Gibson Les Paul guitar.

For many of those here who came of age in the mid- 1970s to early ‘80s, one of those names is Ace Frehley, and to hear it mentioned with the words, “concert in Whitesburg,” is like hearing a flying saucer just landed in downtown.

Frehley is best known as the lead guitarist for KISS, a band that changed the face of rock n’ roll. While KISS precipitated wild claims of backward masked records, and organized record burnings by adults, it caused teens to smear their faces with Kabuki makeup and attempt to touch their tongues to their chins.

Frehley is no longer with KISS, which is doing a “farewell tour” with a replacement guitarist and drummer. Instead, he is touring the county in support of his eighth solo album, “Spaceman,” named appropriately for the stage character he created while a member of KISS, and released in October 2018.

He’ll be at River Park in Whitesburg May 2.

“He always tours a little bit in the spring and summer and he’s got a new band,” said concert promoter Greg Napier, who worked eight months to find a time Frehley could come to Whitesburg. He wanted to play an outdoor venue, and Napier said River Park was the perfect place for it. “Gratefully, the mayor and the city allowed us to have it there.”

Napier said when radio and TV stations began announcing the concert, it generated tens of thousands of online clicks. He said the popularity of KISS, with 100 million album sales, spans generations, and he expects the enthusiasm for the concert to continue. Frehley helped found the band in 1973, left to go solo in 1982, and returned from 1996 to 2002. He’s been releasing solo albums and touring ever since.

“I think that’s one of the things, a lot of KISS fans know this the end of the road for them, and who knows how many more times Frehley is going to tour,” Napier said. He has made 1,100 tickets available, and said he can sell another 1,100 if needed.

Whitesburg is the smallest town Frehley has booked.

Frehley, with his whitepainted face, black lips and silver “Spaceman” accents around his eyes, shredded lead guitar on hits like “Rock and Roll All Nite,” “Strutter,” “Detroit Rock City,” “Shout it Out Loud,” and “Love Gun,” and switched to a softer sound on songs such as “Hardluck Woman.” Now, without makeup and with a different band, Frehley is still smoking up the stage with his signature specialeffects Les Paul guitars and deafening Marshall stacks.

While this tour is about “Spaceman,” Frehley still rocks the stage with a few KISS favorites, such as “Shock Me,” “Deuce” and “Cold Gin,” and the Rolling Stones classic “2000 Man.”

The new album includes eight original songs and a cover of Eddie Money’s 1986 hit “I Wanna Go Back.” The first track, “Without You I’m Nothing,” was co-written by former KISS bandmate Gene Simmons, and Simmons is featured in the song on the album.

Napier, who said KISS was the first band he ever saw in concert, said he wants as many people in Whitesburg as possible to be able to attend and enjoy the show. There will be reserved seating near the stage, and open areas on the grass for general admission. People can bring blankets or chairs to watch the show. Tickets for general admission will start at $30.

“I want to make it economically friendly, but I gotta pay the bills,” Napier said.

Frehley heads to Marathon Music Works in Nashville the night after Whitesburg, then to Chesterfield, Mo., the next night.

Whitesburg has become a must-play for up-andcoming musicians as well as stars who no longer play stadiums and Frehley is one of the biggest names to appear here. He joins an all-star list that includes Don Dokken, Glen Hughes of Deep Purple, Jason Isbell, formerly of The Drive-by Truckers who has now gone on to establish a solo career, Cracker, Colin Hay, formerly of Men at Work, Carlene Carter, and Brian Owens and the Deacons of Soul. In all, Napier said bands he has booked to play in Whitesburg appeared afterward on the Late Show with David Letterman 52 times before Letterman retired.

The trend of bands making it big after playing here has continued. Both of the last two bands Napier booked here went on to play in Guns & Roses’ stadium tour, and the last band he booked before a disagreement with Appalshop forced him to stop booking shows there was Rival Sons, whose song “Do Your Worst” reached Number 1 on Billboard’s Mainstream Rock chart on Monday.

St. Paul and the Broken Bones played their first show outside Alabama in Whitesburg, and went on to fill two opening slots with the Rolling Stones and reached Number 3 on the Emerging Artists Chart last September. The Record Company played their first headlining show in Whitesburg. They just finished a two-month arena tour with Bob Seger, and just started a six-show headliner tour of Europe.