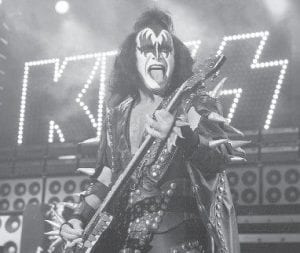 Gene Simmons, bass player for the band Kiss, performs during a 2004 appearance at the PNC Bank Arts Center in Holmdel, N.J. The heavy metal veterans are joining a growing list of classic acts putting out new music through the superstore: “Sonic Boom” is due to be released only at Walmart and Sam’s Club on Oct. 6, 2009. The three-disc project will include a CD of new music, re-recorded versions of their famous hits and a live DVD. The project represents their first album of new music in 11 years. (AP Photo)

Walmart is being embraced with a Kiss.

The veteran pop metal group, Kiss, is joining a growing list of classic acts putting out new music through the world’s largest retailer.

“Sonic Boom” is due to be released only at Walmart and Sam’s Club stores on Oct. 6. The threedisc package will include a CD of the band’s first new music in 11 years, re-recorded versions of famous Kiss hits and a live DVD.

Paul Stanley — one of the quartet’s two original members, along with Gene Simmons — said the band chose to release the album at Walmart because the store allowed them to make it memorable.

“They offered us an opportunity to do something that’s very much in line with what we used to do with our classic albums, and that’s to give people more than just an album of music,” Stanley said in an interview last week. “We’ve always believed in trying to make an album a special event.”

Large store chains have become a favorite venue for classic acts to reintroduce themselves with new material. Walmart has sold millions with releases by the Eagles, AC/DC and other key acts. It also has a Foreigner three-disc package due out in September. Target released a three-disc set from Prince earlier this year. Best Buy had the exclusive release of Guns ‘N Roses first album in years.

Walmart executives said Kiss, like other music acts they’ve worked with, has a special appeal to their customers.

“We see Kiss as an iconic band … that resonates with the Walmart customer not just with their music but in a lot of different areas,” said Tom Welch, Walmart’s music buyer.

“Sonic Boom,” which also features Kiss members Tommy Thayer and Eric Singer, was produced entirely by Stanley. The guitarist said he made that a condition before he would agree to do the album.

“The recent past, or the last decade or two, has not produced the kind of albums that I would have hoped, and that’s due to a lot of factors — lack of input or lack of focus by all the band members,” he said. “(There’s been a) lack of a lineup where people were working toward the goal of making a great Kiss album as opposed to trying to showcase themselves.”

“Everybody worked their tails off to contribute 100 percent of their effort and their ability to make this the great Kiss that not only do the fans deserve, but we deserve,” Stanley said.

The band is giving a special concert in Detroit on Sept. 25 to celebrate the album.

When asked if Kiss was doing anything differently to appeal to a new audience, Stanley said: “We’ve never geared ourselves towards anybody. When we’re at our best is when we gear ourselves toward us.

“Classic Kiss isn’t about an album this year or 10 albums ago. It’s about a state of mind … We are about entertainment with a capital ‘E,’ and we don’t apologize for it.”