Kitchen duty is fun if regular occupant is in bed sleeping 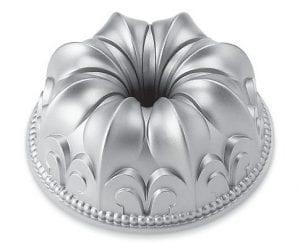 The Bundt pan was developed more than 60 years ago by the late H. David Dalquist, who founded the Nordic Ware company with his wife Dorothy. Dalquist’s creation allows part-time bakers such as newspaper columnist Ike Adams to turn out a suitable fruitcake every Christmas season, as long as some apricot “cooking” brandy is also on hand.

Early on Christmas Eve — just after the drizzling, foggy, rebel-gray, sort-of “daybreak” announced itself — I hobbled out of bed and wobbled to the kitchen to put on a pot of coffee and to check out the big Bundt cake pan I had put to use just after midnight Monday morning.

The pan contained the nowcooled fruitcake I had struggled with for more than three hours the night before and then popped into the oven in the weest hour.

I simply can’t stand it when my wife Loretta looks over my shoulder and offers not-so-helpful hints when I am baking and sort of making it up as I go along. (Some examples: Baking powder in selfrising flour? That many eggs? You’re kidding, right?)

The way I avoid unneeded is most-certainly unsolicited advice when I want to be creative in the kitchen is to wait until my wife and down for the count for the night.

On Sunday night, after 24 nonstop hours of making black-walnut fudge and country ham and spicy cookies she finally started snoring to the tune of “White Christmas,” with visions of sugar plums dancing on her brow and the cat curled up and purring at her feet, Loretta shut down just before the nightly news came on Channel 18.

When Loretta sleeps through this guy named Bill’s weather forecast, I know she’s out of it and not apt to wake up for several hours (she has a not-so-secret crush on him). So that’s when I went to work on my fruitcake.

It takes me about half an hour just to find all the ingredients and arrange them on the kitchen table. I mean, unless you live in someplace way bigger than Letcher County or where I now live in Garrard County, you don’t just run out at the last minute and buy at the last minute such items as nectar of apricot. Nor do you find just anywhere candied lime, candied pineapple, soaked dates, whole-kernel black walnuts, or real apricot brandy just waiting there for you to scoop up at once.

I spend some time well before the holidays gathering my fruitcake ingredients, which I stash about the kitchen at random for weeks before the actual preparation of the cake. Thirty minutes is actually a short amount of time to locate and assemble them on the table.

Of course, the first thing I try to find is that pint of apricot brandy, because I know I’ll need less than half of it in the cake batter. I figure a swig to start with will help me remember where I put away all the other stuff. Can’t find candied lime or the cream of tartar or the lemon zest? Take another sip and memory is restored.

Now the first two things I do is turn my oven on to 350 degrees and oil and flour my Bundt pan. Then I spend the next hour stirring and beating the ingredients together with a big spoon in a huge mixing bowl. As far as I am concerned, electric mixers are for sissies. Friends admire the biceps on my right arm for weeks after the first of the year and ask, “How’d you do that?” I tell them I made a fruitcake over Christmas. Finally, I dump the mixture in the Bundt pan, pop it in the oven and pray while I finish off the last few sips of apricot brandy.

Just before 3 a.m., my fruitcake came out of the oven and I went to bed. Loretta is ready to get up after more than nine hours of deep sleep, but I’m going back to bed. I’ll tell you how the cake turned out sometime after the first of the year. If it tastes as good as it smells and looks, I’ll be bragging.