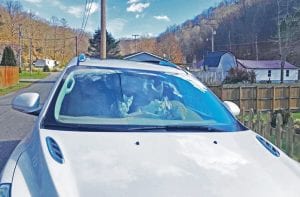 Two kittens rest on the dashboard of Brent Vance’s Buick automobile. The kittens were placed there by one or more vandals. (Photo courtesy Brent Vance)

A local minister and barber is looking for answers after someone abandon two kittens inside of his new vehicle.

Brent Vance, the pastor of the Pentecostal Church of Jesus in Neon, and owner of Brent’s Barbershop in Whitesburg, said as-yet unidentified persons abandoned two cats inside of his 2017 Buick Enclave outside of his residence sometime on the evening of December 1 or early December 2. Vance said the animals scratched the leather interior of the vehicle, and defecated and urinated inside of it.

Vance said he wants answers as to why the incident occurred.

Vance said he left his car unlocked on that Sunday night. The next day, when he found the animals, he said, the car was locked, and the cats and some other items were inside. He said he is sure the cats, as well as the other items, were not in the vehicle when he left it Sunday evening.

“You’d know if there were cats in there,” he said.

The damage done to the vehicle will likely eclipse $500, Vance said. He posted about the incident and the damage on social media.

“The cats are fine, thank God, but the car interior is not,” Vance said in a Facebook post following the incident. He continued, “Somebody is guilty of animal cruelty, trespassing and vandalism.”

Vance said he’s been dealing with trespassing on his properties in the Neon area over recent months. He said the cats being left in his vehicle is just the latest in a long string of incidents.

Vance said he has had informal conversations with law enforcements, but he has yet to file a formal complaint. He said more than anything, he just wants to know why he was targeted.

“I’d like to just ask them ‘why?’,” Vance said, before joking about the incident. “If they’d just call me, I’d like to ask them that. I may even tell them to come on down and get a haircut, too.”

Vance asked if anyone has information about the cats being left in his vehicle, please contact him at 606- 821-8544.