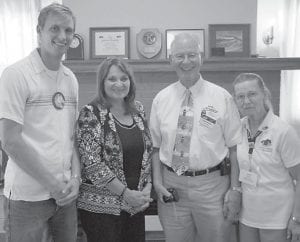 At last week’s weekly meeting, the Kiwanis Club of Jenkins welcomed a guest speaker, Don Ritter, the Kiwanis Kentucky-Tennessee District Governor. He expressed his passion for Kiwanis, and said the organization has played an important role in improving the lives of children in our communities and worldwide.

Another guest speaker in attendance was Division 8 Lieutenant Governor Donna Ratliff, who gave an update to the club on potential service projects to pursue in the future. The KY-TN District will be collecting underwear and school supplies as a service project for the children in the district.

In other news, club member Ked Sanders provided information about the upcoming yard sale fundraising event. The yard sale will start Wednesday, August 1, and last through Friday, August 3, and will be held at the Jenkins City Park. He also thanked the club for its past contributions to the Letcher County Kids Days Committee, stressing the importance of the events that are held countywide throughout the year.