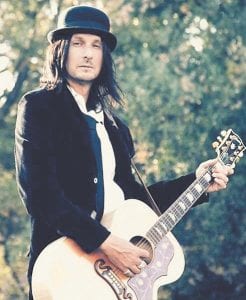 Mark Knight, the Los Angeles based rock musician who is largely responsible for showing that Whitesburg could successfully host music acts with national followings, is returning to Summit City this week for a Friday night show.

Knight, a founding member of the Eighties rock band Bang Tango, first appeared in Whitesburg to help open Summit City in late July 2007. He performed before the large opening-night crowd then with another ex-Bang Tango member, Mark Tremalgia, who will be back in Whitesburg with Knight this Friday.

Knight penned all 12 songs on the recording, which he describes as “electrified singer-songwriter roots rock with a dash of country and blues.”

Knight, a native of North Hollywood, Calif., who was raised by adoptive parents, entered the national music scene in 1987, when Bang Tango was signed to Mechanic Records, a label formed by MCA to specialize in the hard rock, glam metal and heavy metal music popular during that time. The band’s debut album, Psycho Café, was released in 1989 and yielded the single “Someone Like You,” which received heavy airplay on MTV.

After leaving Bang Tango in 1995, Knight immediately set to work on following his dream of becoming the outstanding singer and songwriter he is today — one who keenly stays away from the flavor-of-the-moment stuff that seems so prevalent today.

“As I grew older I had no interest in chasing any kind of trend,” Knight explains. “While I was in Bang Tango I was just writing music for the band. It was a different time then and we were well caught up in that scene. By the time the band split up I was more interested in writing for myself and what I like and what I wanted my songs to sound like.”