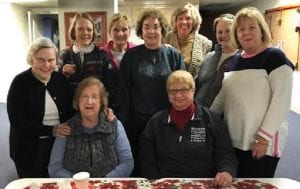 The photo above shows Letcher County native Lily Jane Collins McCraven standing center in a snapshot taken with a few of the members of a large knitting group at St. Andrew’s Episcopal Church in northern Kentucky. The photo below shows Whitesburg Mayor James Wiley Craft and Letcher County Schools employee Katrina Shepherd Whisenant at a recent City of Whitesburg Christmas event as they gave away some of the dozens of scarves the knitters sent to Letcher County to be given away as presents.

Letcher County native Lily Jane Collins McCraven is a member of a knitting group at St. Andrew’s Episcopal Church in Ft. Thomas, Kentucky, a suburb of Cincinnati. For the last few holiday seasons, Mrs. McCraven, a daughter of the late Brother Ray Collins and Estelle Collins of Whitesburg, and her friends knitted clothing to share with students at Arlie Boggs Elementary School at Eolia. This season they decided to offer their colorful scarves to a broader group of county residents who attended the City of Whitesburg’s Christmas celebration, held December 13. The photo directly below shows packages containing some of the neck scarves that were given away. Each of the packages also held a Christmas message of peace and goodwill towards men (see photo at bottom left). 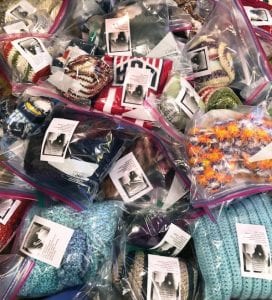 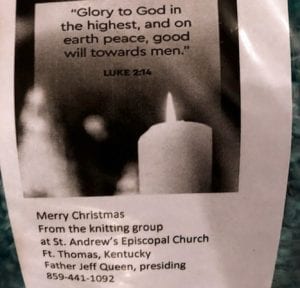 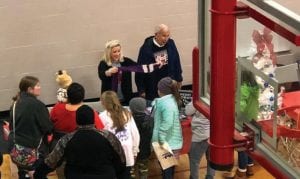