Knott County wins district, is a favorite in 14th Region 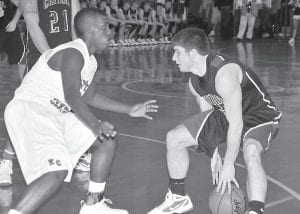 FACE OFF — Letcher County Central’s Logan Johnson (right) tried to get around and Knott County Central defender during the Cougars loss in the championship game of the 53rd District Tournament. (Photo by Chris Anderson)

In the wake of Perry County Central’s upset loss to Buckhorn in the semi-finals of the boys’ 54th District Tournament last week, the Knott County Central Patriots have established themselves as the front runner in this week’s 14th Regional Tournament.

The Patriots, who defeated the physically powerful Letcher County Central Cougars on Saturday night, enjoy one other huge benefit — the regional tourney is being played on their home court.

Despite the Knott Central’s added advantage of having two of the top players in the region — Cameron Justice and Zack Davis — the Patriots’ road to the Sweet Sixteen will not be easy, especially with Breathitt County looming in the same bracket.

Any one of five teams — Breathitt County, Buckhorn, Hazard, Knott Central or Letcher County — could claim the regional crown on March 6.

At this time of the year, the game of basketball becomes really pretty simple; the team that can string together the most consecutive games with the fewest turnovers, claim the most rebounds and convert the most free throws will be making the trip to Rupp Arena.

For the third time this season, the Patriots held on down the stretch to edge the Cougars. This time the game was at Jenkins High School for the championship of 53rd District Tournament.

The Patriots jumped on top 5-0 with LCC having to play catch-up for much of the entire game. Led by super freshman guard Cameron Justice, who just refused to wilt to defensive pressure, and by senior guard Zack Davis, the Patriots withstood numerous charges by the Cougars.

The Patriots hit four of their first five field goals and led 10-3 with five minutes left in the first quarter before senior guard Trenton Whitaker found his range. Whitaker, who scored nine of his 15 points in the first quarter, stuck back an offensive rebound to tie the game at 11 with 1:19 left in the opening quarter. Justice’s short jumper gave the Patriots a 13-11 lead at the end of the quarter, and his back-to-back treys early in the second quarter extended the Patriots’ lead to 17-11.

Turnovers and strong rebounding by the Patriots limited the Cougars’ inside strength in the second quarter and allowed Knott Central to pushed their lead to 30-20 by the break.

Freshman Evan Hall’s layup gave the Patriots their largest lead of the second half, 57-47, with 2:20 left.

Still, the Cougars’ refused to quit. Sam Robinson’s pair of free throws and two more by Johnson cut the Patriots’ lead to 57-53 with 48 seconds, but in the final seconds Justice made three of four from the charity line as the Patriots held on for the win.

The Cougars easily defeated the Lions in the opening round of the district tournament.