Knoxville musician to be in Whitesburg 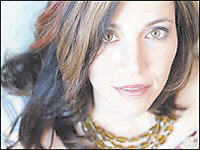 Knoxville-based singersongwriter Robinella will be playing in downtown Whitesburg at the Summit City Lounge on Thursday, Feb. 5, at 8 p.m.

Hailing from eastern Tennessee, Robinella is appearing in Whitesburg for the second time. Noted online reviewer Music Box says of Robinella, “Robinella has the voice of an earthbound angel, one that possesses the jazzy, lilting musicality of Sarah Vaughan as well as the rugged, earthy twang of

the Lonely, her latest outing with the marvelous CC String Band, is filled with questions of faith and fate and tales of love, both lost and found. Musically, the effort is an upbeat, minimalist pop album that is influenced greatly by jazz, bluegrass, folk, country, and soul music.”

Tickets for Robinella will be sold for $5 and the show will start at 8 p.m.