Kona man is charged after wielding gun in restaurant 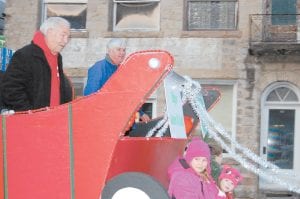 Whitesburg Mayor James W. Craft (pictured above left) and Letcher County Court Clerk Winston Meade rode in a large sleigh in the Christmas parade in downtown Whitesburg on Dec. 9. Meade served as grand marshal of the parade. Also riding on the sleigh as it made its way up Main Street were Olivia Hammock, 10, and Molly Hall, 2.

A Kona man accused of frightening patrons and employees at McDonald’s was arrested early Sunday morning.

Whitesburg Police Offi cer Alisha Congleton said Kevin Houston, 26, of 164 Bill Lewis Hollow, entered the Whitesburg McDonald’s restaurant around 6:15 a.m. on Dec.11 and pulled a 9 mm handgun out of the front of his pants and showed the loaded gun to a table of men who were drinking coffee. Congleton said Houston was extremely intoxicated and was trying to get one of the men to buy the gun.

Congleton said Houston hid the gun in his vehicle before she arrived at Mc- Donald’s. She found the gun as well as a significant amount of copper and a Peterbilt coal truck rim in the back of his blue Ford car. Surveillance footage captured Houston taking the rim from Breeding’s Heavy Haulers in Isom, said Congleton.

While Congleton was searching Houston’s vehicle, witnesses inside the restaurant saw Houston slip pills in a cup containing a soft drink.

Houston was arrested and charged with carrying a concealed deadly weapon and tampering with physical evidence. After further investigation, Houston was also charged with thirddegree burglary, theft by unlawful taking ( more than $500), possession of a firearm by a convicted felon, public intoxication, prescription controlled substance not in proper container and first-degree wanton endangerment.

Houston was being held in the Letcher County Jail. Bond is set at $10,000 cash plus home incarceration.