Kona store was target of attempt by arsonists 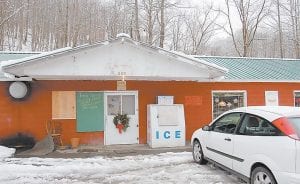 McAuley’s Country Store (above) is located at Kona, near the Martha Jane Potter Elementary School. The store’s owners are offering a reward for information leading to the arrest of the person or persons who threw a Molotov cocktail through a window (bottom left).

The owners of a Kona store are offering a cash reward after a Molotov cocktail was thrown through a kitchen window.

Kentucky State Police said an incendiary device was thrown through a window of McAuley’s Country Store in an attempt to cause a fire, but the device extinguished itself and the arson attempt was unsuccessful.

“It was a Mason jar that had a hole in the lid with a rag stuck through it with kerosene and a wick,” said Jim McAuley, owner of McAuley’s Country Store. “For some reason the flame went out when they threw it.”

“It was an attempt to burn it,” said McAuley. “For what reason, I have no idea.” 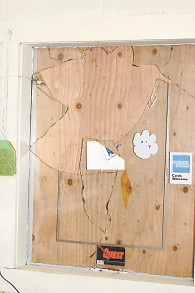 “It just floors me,” said Karen McAuley. “I don’t know who would want to do such a thing.”

Sgt. Jason Bates of the Letcher County Sheriff ’s Department said a vehicle may have driven by the store when someone was about to throw the Molotov cocktail. He said that may have contributed to the device not igniting.

The McAuleys are offering a $1,000 reward for information leading to the arrest and conviction of those involved with this crime.