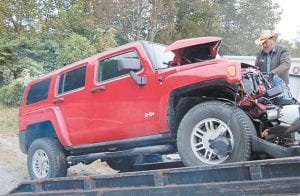 AFTERMATH — In the photo above, Donald Niece of Thornton helped load a Hummer onto a rollback last Friday morning. The vehicle was heavily damaged after colliding with the bull elk seen in the photo below on U.S. 119 at Kona. (Photos by Dianna Holbrook)

A Kona woman hit a large bull elk on her way to work Friday morning, making it the second elk she has hit in the last year and a half.

Kimberly Potter Slone, who works at the Appalachian Regional Hospital centralized billing department in Jenkins, was attempting to pass a school bus near Webb Branch and the old US 119 loop at Kona around 6 a.m. on Sept. 10 when an elk crossed the road in front of the school bus. Slone didn’t see the seven-pointby eight-point elk coming and hit it broadside.

“This one jumped out in front of her and she didn’t know what hit her until it was over,” said Francine Potter, Slone’s mother.

Slone, who was traveling alone in a red 2008 Hummer H3, was treated for back injuries. The elk died. The Hummer is totaled.

Potter said she was riding with her daughter in April 2009 when an elk came onto the four-lane highway near the Mayking Fire Department.

“That one shot across the road and she tried to dodge it but there were cars everywhere,” said Potter. “It did a lot of damage that time, too.” 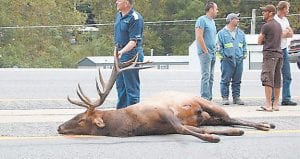 Potter said that elk ran into the woods.

Frank Campbell, captain of the 7th District of Kentucky Department of Fish and Wildlife, estimated that about 10 elk a year are hit and killed by traffic in the 13-county area that makes up the 7th District. He said most accidents occur near the Knott/Perry County line on Highway 80.

“This lady was very unfortunate,” said Campbell. “To hit two I’d say is a rarity without a doubt.”

Campbell said September is the beginning of breeding season and elk are on the move.

“She’s probably traveling that area at the time they are moving,” said Campbell.

The area where the elk was hit Friday is located near the base of Pine Mountain, not far from a location where elk were released more than 10 years ago.