Koontz back in fine form 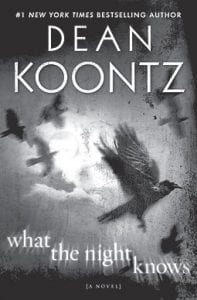 “What the Night Knows” is one of the best horror novels author Dean Koontz has written in years, reviewer says. (AP photo/Bantam)

Dean Koontz, one of the suspense giants, has written one of his best horror novels in years. Koontz has been hit and miss lately, but he’s back in fine form with “What the Night Knows.”

Over two decades ago, a madman stalked families, and his horrific crimes terrified various neighborhoods until he picked the wrong house. Teenager John Calvino came home unexpectedly and killed the intruder, leaving him the sole survivor. Over 20 years later, Calvino is a homicide detective with a family of his own — and a secret that haunts him.

The murders are happening again, and the killer is using the same methods from the earlier crimes. Calvino realizes that he and his family are in danger. What he never told anyone about that fateful night so long ago were the dying words of the killer, who promised to come back from the grave when Calvino had a family and then eliminate all of them.

The idea of a ghost coming back to wreck vengeance and haunt someone isn’t new, but Koontz puts a spin on it that makes “What theNight Knows” so compelling, terrifying and fresh. Focusing the narrative on Calvino and his fear — and shifting away from the killer and his motives — tightens the pace and makes it all too surprising when the climax comes.

“What the Night Knows” is true terror in print, and it will be interesting to see if the movie that likely follows will be half as good.

Jeff Ayers is the author of “Voyages
of Imagination: The Star Trek Fiction
Companion” (Pocket Books, 2006).