Koppel looks at changes in China 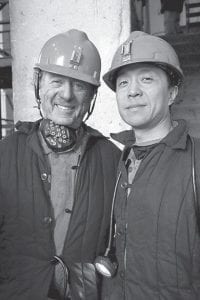 Ted Koppel poses with a coal miner in Datong, in the Chongqing province of China, for a four-part series examining contemporary China called, “Koppel on Discovery: The People’s Republic of Capitalism,” premiering Wednesday at 10 p.m. and continuing through Saturday, July 12, on Discovery Channel. (AP Photo/Discovery Channel)

The image of Ted Koppel interviewing world leaders is so ingrained that it feels odd to see him wearing a hardhat for a nervous trip into a Chinese coal mine, or sitting in a Chongqing karaoke bar where teenage girls are hired to “entertain” male customers.

Good thing he did, since the field work is what makes his four-part Discovery Channel series, “The People’s Republic of Capitalism,” so valuable. It premieres 10 p.m. Wednesday, with three other installments at the same time on successive nights.

The series illustrates how dramatically China has changed in ways obvious and not-so-obvious, from the jumble of new skyscrapers in a city that barely existed two decades ago, to the drag bars that operate despite official disapproval.

The opening images drive home the point that the U.S. and China’s economic interests are intertwined. A woman laid off at a Briggs & Stratton plant in Missouri, wondering if she has the skills to find new work, contrasts with the company’s thriving plant in China. Discovery traces an Ethan Allen sofa from its assemblage in China, the upholstery done in the U.S. to its purchase by a rich couple in China.

“You may not think you care much about what is happening in China,” Koppel told The Associated Press. “Let me tell you, what happens over there is going to make quite a difference with what is going to happen over here.”

What is happening in the auto industry shows the complexity. China is adding 25,000 new vehicles a day, many to first-time buyers, and the country is embarked on a road-building binge similar to what happened in the United States during the Eisenhower administration.

More Buicks were sold in China last year than in the U.S., and Ford increased its sales in China last year by 30 percent, the Discovery series says. Liberty Mutual insurance is setting down roots in a society where accident payoffs are often done in cash, on the spot. Now some Chinese automakers are looking to export their cars to the U.S.

Estimates are that by 2030, China will have more cars on the road than the U.S.

Gas prices are already swirling toward $5 a gallon in the U.S. now. What happens when there’s so much more need for oil?

“We’re going to be competitive with these people, and whether that competition is resolved by collaboration or confrontation is really the big question for the next 20 years,” said Koppel, the longtime “Nightline” host who was ABC News’ Hong Kong bureau chief from 1969 to 1971.

He recalled asking citizens of China during the 1970s about their ambitions and hearing only that they wanted to do what was best for their country.

“Now to see their kids 30 years later and you ask the kids the same thing – what do you want to do? what do you want to be? (The answer is) ‘I want to get rich. I want to make some money,”‘ he said. “Everything is writ large in China. The changes are absolutely mind-blowing. They’ve pushed about 300 million people into the middle class.”

Producers are so intent upon showing the changes on the ground, a little more political perspective would have come in handy, like a short history lesson on how the decision was made to turn China aggressively capitalist.

The old “Nightline” Koppel, the one who made public officials squirm, still makes an appearance in an interview with a man who doesn’t want to admit China punishes officials who take bribes but not the businessmen who offer them.

Billionaire real estate developer Vincent Lo points out the obvious irony that it’s a communist country that now has “the most pro-business government in the world.” He considers some European countries far more socialist than the once-feared “Red” China.

“The mistake that some people make, I think, is that they assume capitalism is a political doctrine,” Koppel said. “It’s not. It’s an economic theory. You can have a totally capitalistic society, which China is rapidly becoming, and still not be one step closer to democracy.”

The Discovery series appears like it was largely done before the strong earthquake that struck the southwestern region around Chongqing in May. It is dealt with briefly, and Koppel said it provides a useful example of how the communist government keeps such a strong hold on the country despite the economic freedoms.

Shortly after the earthquake, in an unusual phenomenon for China, many people packed cars with supplies and drove to the stricken region to help. The government let this go on for a few weeks, then shut it down.

It was something the people were not asked to do by the state. If this sort of thing continued, it could foster a spirit of volunteerism, and ultimately organizations that could be a rival for Communist Party control, he said.

Discovery interviews a 93- year-old peasant woman who, despite an evident need for medical care, still says she’s seen no better time for China. That’s a clue about why the new economic freedom hasn’t yet been followed by a strong yearning for political freedom, Koppel said.

“What is keeping everybody more or less on balance right now is the inarguable fact that China is better off today than it was 30 years ago,” he said. “If for any reason it looks like that has stopped, then the Chinese government has lost its legitimacy and its reason for having earned the peoples’ trust.”