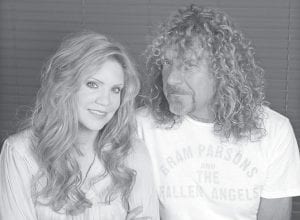 Alison Krauss is a master at slipping into musical styles.

As a singer, musician and producer, the bluegrass star has worked with artists as diverse as Sting, Brad Paisley, James Taylor, Phish, Dolly Parton and Alan Jackson. Her latest project, with former Led Zeppelin frontman Robert Plant, might be her most ambitious yet.

Produced by T Bone Burnett and released two weeks ago, “Raising Sand” is a dark, whispery record that finds them interpreting the likes of Townes Van Zandt, the Everly Brothers, Mel Tillis and Tom Waits.

“I think of it as a window into some other world,” she says of her collaborations. “You take away something by watching someone sing and watching them do something they were naturally born to do.”

Plant, who still wears a shaggy mane of curls, says Krauss and Burnett set the tone for the new record.

“I think my vision was a little more lightweight,” he says, sipping hot tea. “Alison wanted something more serious, with more color and shade.”

What the record is not is yet another predictable duets album. Plant and Krauss harmonize over a dreamy, at times eerie, soundscape that’s different from most anything they have done on their own. It’s neither rock, nor bluegrass.

“The idea was to take them both out of their comfort zone. To take us all out of our comfort zones,” says Burnett, who selected the musicians and most of the 13 songs, which includes a composition by Plant and Zeppelin guitarist Jimmy Page called “Please Read the Letter” from their 1998 album “Walking Into Clarksdale.”

Both singers had to reach. Plant had to sing harmony – something he’d never done before. Krauss had to sing tunes that didn’t always fit her lyrically.

“We were dealing with a lot of classic songs, and I didn’t want to mess with that,” she says. “That’s why we didn’t change the gender on some of the songs. We wanted to keep the integrity of the song. So I had to stretch to sing something that wasn’t comfortable. It was a great experience.”

Plant, 59, and Krauss, 36, have known each other a while, but the idea of making an album didn’t really take hold until they sang together a few years back at a tribute concert for blues great Leadbelly.

As odd an alliance as it might seem at first, it’s not that farfetched. Krauss is a fan of classic rock and pop tunes and has covered the Beatles, the Allman Brothers and Todd Rundgren on her records with her band Union Station. Plant has borrowed from American roots music throughout his career, particularly blues artists like Robert Johnson and Big Bill Broonzy.

“Once I heard the music of the Mississippi Delta, I was no longer English. I was a man of the world,” Plant recalls.

A tour is in the works, but both are mum on details. During a recent taping for a January episode of the Country Music Television show “Crossroads” – their first public performance together outside of the Leadbelly tribute – they looked comfortable with each other but worlds apart on stage. While Krauss was low-key, almost withdrawn, Plant was animated and talkative.

Musically, they were in lockstep. Krauss even took lead vocals on the two Led Zeppelin numbers, “Black Dog” and “When the Levee Breaks.”

Krauss, who has 20 Grammy awards – more than any female artist in history – says she learns by working with people like Plant, down to details like the way they stand when they sing.

Plant also sees the collaboration as a chance to grow – a rare opportunity for a guy who’s been doing this 40 years and who helped define the profile of a male rock star in the ’70s. During the interview, as makeup artists, photographers and assistants scurried about, he remarked, “The music is one thing, but all this other stuff is something else altogether. I used to be in a group where we hardly did anything. We hardly ever played, and when we did, we got there late.”

Nonetheless, he’ll join the two other surviving members of Led Zeppelin – Page and bassist/keyboardist John Paul Jones – for a Dec. 10 tribute concert for the late Atlantic Records co-founder Ahmet Ertegun. Jason Bonham, son of the late drummer John Bonham, will sit in on drums at the London show. The show was postponed from Nov. 26 after Page fractured a finger.

But don’t look for a fullblown reunion tour or album. Plant is focused on the present.

“I think I was 19 when I started rehearsing for Led Zeppelin. I’m not the same guy now,” he says. “To go back out of respect to complete the circle, to bring Jason Bonham into the picture, to make his mom smile, to make Ahmet’s sweetheart feel good and to help all those kids in that charity is the right thing to do.