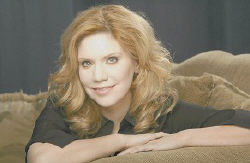 More than a few people in town wondered what was up when rock legend Robert Plant was spotted in recent months at the Grand Ole Opry and at the popular bluegrass club The Station Inn.

There’s also “Please Read the Letter,” a song written by Plant and Led Zeppelin guitarist Jimmy Page from their 1998 album “Walking Into Clarksdale.”

“You’ve got two singers that can handle a wide range of material – storytellers. So you look for the stories,” Burnett said in the release.

Krauss and Plant first sang together a few years ago at a tribute concert for blues great Leadbelly at the Rock and Roll Hall of Fame.