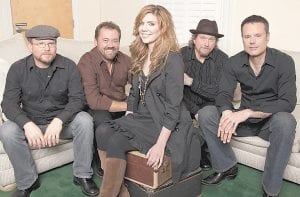 They had plenty to start with when they began recording for the album that would become “Paper Airplane.” Over time, though, they became disenchanted. Many of the songs just didn’t feel right for the bluegrass supergroup known for the special quality of its material.

“ It’s quite possible that we canned three albums worth of material,” singer and guitarist Dan Tyminski said.

The band soon decided that it’s long- delayed and muchanticipated follow-up to 2004’s “Lonely Runs Both Ways” would be delayed once again. The five members of the group — dobro player Jerry Douglas, bassist Barry Bales and banjo player Ron Block round out Union Station — had struggled to get together after Krauss’ collaboration with Robert Plant on “Raising Sand.” A tour for that album and a scrapped follow-up session stretched into time originally blocked out for Union Station. Krauss’ migraine headaches prematurely ended one session and others were diffi- cult to schedule because the other members had their own busy careers and families to attend to.

So by the time they got back together to record they were more than ready. But, Bales says, it was a struggle to come up with material. The group can be picky, he acknowledged, and occupies “this weird middle ground” in Nashville. The band doesn’t play Top 40 country songs, eliminating a vast songwriting resource, and it doesn’t mine well-trod traditional bluegrass territory either.

Most of the songs the band had already recorded didn’t have that immediate feel they were looking for with this album. They culled six from those first sessions, but that didn’t make a complete album. So they started a search for more.

“It was kind of like going to the eye doctor,” Bales said. “Is this better or is this better?”

Krauss decided to lean on an old friend Robert Lee Castleman, who had come through for her many times in the past on Grammy winning songs like “The Lucky One” and “Restless.” It had been a while since they worked together, but she thought for sure he’d have a song to spare.

She got some bad news, though. Turned out Castleman was a very happy man.

“And he says, ‘I’m dry. I don’t have anything. I’m not inspired,’” Krauss said. “He’s always written about love and it not working out and he’s now married with a beautiful daughter and a beautiful son. And he says, ‘I go to these places. I used to be brokenhearted and I just can’t find it.’”

Nevertheless he invited Krauss over and she sat with him for a while, catching him up on her life. The previous few years had been eventful for Krauss, whose “Raising Sand” project with Plant was a surprise whirlwind that netted six Grammy awards. She also worked on nearly two dozen other projects between the release of “ Raising Sand” and “Paper Airplane,” including a Grammy- winning release by Yo-Yo Ma, producing an album for Alan Jackson and collaborations with Reba McEntire, Dierks Bentley, Brad Paisley and Mary Chapin Carpenter.

She had a lot to tell. Ninety minutes later she left Castleman’s with few expectations.

“So then about seven hours later he called me with a title,” Krauss said. “He said it’s called ‘Paper Airplane.’”

It is an unusual song in that it’s completely personal for Krauss, yet she didn’t write a single word. It proved to be Krauss’ favorite and became the title track, leading off the album.

It’s trademark Krauss — delicate and ethereal, yet powerful in both message and emotional effect. Its themes — disconnection and the end of a trial — resonate across the eight songs Krauss sings on the album.

That wasn’t the only one Krauss found. She brought the powerful “Dustbowl Children” to Tyminski, a song by Peter Rowan that Tyminski was familiar with but had never imagined himself performing. Tyminski said Krauss has a special gift when it comes to matching him with material.

“It’s kind of inexplicable in a lot of ways,” Krauss said. “You know we get calls, ‘What do you need? What are you looking for?’ Well, you don’t know till you hear it so it’s just about waiting for the right moment when something hits you.”

Members of the band had just finished taping a performance before their interview, their last assignment of a very long day, and were clearly in jovial moods after another long break apart. They sat in the room where Tyminski auditioned for and won the job as George Clooney’s singing voice in “O Brother, Where Art Thou?,” the film that pushed the band into the national consciousness. Talking in the past tense about the trials they went through putting together the album seemed to raise everyone’s spirits and the jokes came quickly.

Asked about her ability to select material for Tyminski, Krauss said: “Dan can sing many, many things. I have my favorite things for Dan. I like Dan when he’s …”

“No control?” he asked

“Has a gun or shovel?” Douglas asks as the group erupts in laughter.

Krauss also persuaded her brother, Viktor, to lend a song to the album. And she found another for Tyminski, convincing Sidney Cox to finish “Bonita and Bill Butler.” Both Castleman and Douglas suggested Richard Thompson’s “Dimming of the Day” separately and simultaneously.

Finding the right songs turned out to be all it took. Everything after that was simple.

“The playing of it, that’s the easy part,” Douglas said. “It’s alchemy. There’s a sound to this band that no other band has and you can recognize this band within four bars of any song you hear us play.”