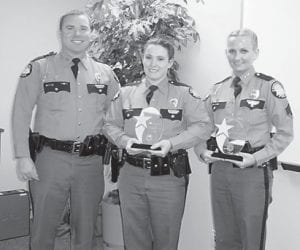 Kentucky State Trooper Jennifer Sandlin and KSP Sgt. Jackie Pickrell were presented recently with awards by the Kentucky Women’s Law Enforcement Network. The awards were for exceptional valor while in the performance of their duties on January 2, in which they were both involved in a physical altercation with a subject in Perry County in which the subject was fatally wounded.”

Jennifer Sandlin is a 1998 graduate of Perry County Central High School and a 2002 graduate of Eastern Kentucky University with a bachelor’s degree in forensic science. She was graduated from the Kentucky State Police Academy in 2003 and assigned to Post 9. She was assigned to Post 13 in 2006. She is a member of the KSP Post 13 criminal interdiction team.

Jacqualine Pickrell is a 1998 graduate of Whitesburg High School, and a 2002 graduate of the KSP Academy. She was assigned to Post 8, and joined the electronic crimes branch in 2004. She was assigned to Post 13 in 2006 and was named Trooper of the Year for the Hazard post for 2006-07. She receiving the Governor’s Award for Impaired Driving Enforcement for Post 13 in 2008, when she was also Member of the Year for the Kentucky Women’s Law Enforcement Network.

She worked with the Perry County Drug Court until a promotion on Sept. 1, and was named Crisis Intervention Officer of the Year in 2009 by Crisis Intervention Team Kentucky. She was promoted to sergeant this year and transferred to KSP criminal ID and records.