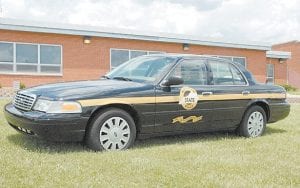 Pictured at left is a current KSP cruiser with the “retro-look” appearance package. At right, KSP Lt. David Hay, formerly assigned to Letcher County, models a vinatge KSP summer uniform from the early days of the agency at Tuesday’s unveiling ceremony.

“The Ford cruisers used by KSP during its early days were solid black with a gold striping and a distinctive state police seal,” said Brewer. “The color scheme was selected to clearly distinguish the new agency from its predecessor, the Kentucky Highway Patrol, which used white vehicles.”

“In those days, troopers traveled at 35 miles per hour when not pursuing speeders,” he explained. “Only a few congested urban areas had any speed restrictions at all. The only law that allowed police to charge motorists with reckless driving was if they were traveling more than 45 miles per hour.”

“Today our vehicles are obviously more sophisticated with advanced performance packages and electronics,” he added. “Their gray color and blue striping are designed for more modern times. Employing the black and gold color scheme on a limited number of our modern vehicles helps to highlight the agency’s 60-year heritage and creates visible continuity with the principles of service, integrity and professionalism that the agency was founded on and still follows today.” 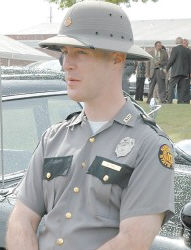 Although, the Kentucky State Police has used many different vehicles during its 60 year history, the cruisers sporting the vintage look carry the Ford brand name, the same as the agency’s first vehicles in 1948. One vehicle will be assigned to each of KSP’s 16 posts throughout the state and one to headquarters. They will be used for public affairs, exhibits, recruiting and other special assignments for one year. At that time, they’ll be converted back to the standard color and markings and returned to general duties.