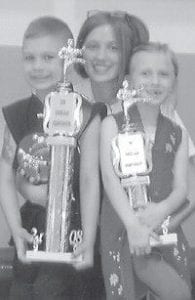 Two members of the Ng Family Four Seasons Kung Fu class recently competed in the 2008 Somer Slam in Somerset. Pictured are Drew Richardson and Luna Combs with their instructor, Angie Branham-Ferrell. Luna placed third in the weapons division. Drew placed second in the weapons, and first in the forms division, allowing him to compete in the Grand Champion Competition.