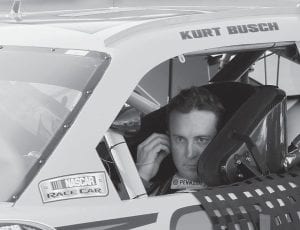 There’s little doubt Roger Penske made the right choice in skipping the NASCAR race at Richmond, a decision that spared him from the R-rated rant driver Kurt Busch launched against his race team.

Angry because his car wasn’t competitive, Busch railed against his crew during the early portion of Saturday night’s race. He pointedly blamed Penske Racing’s shortcomings on technical director Tom German over a radio frequency available to the public, and that was just his warmup act.

When Busch ran into Ryan Newman’s spinning race car, he delivered an expletive-laden tirade that paled beside the dozens of rants the acid-tongued driver has unleashed over the years.

It might have been amusing if it weren’t so downright abusive to a Penske team that desperately needs Busch to lead the charge for the entire organization. While the Indy- Car branch thrives — Will Power gave Penske a win Monday in the rain-delayed race along the streets of Sao Paulo — the NASCAR side of the business is searching for solid footing.

Penske has never won a championship at NASCAR’s highest level, and he’s yet to assemble a driver lineup capable of consistently challenging the top teams in the series. There was promise at points last year when Penske had five full-time teams — three in Sprint Cup and two in Nationwide — but a lack of sponsorship cost Sam Hornish Jr. his Cup ride and knocked Justin Allgaier from his Nationwide Series seat.

Now Penske is down to just Busch and Brad Keselowski in NASCAR’s top series, making it a twocar team fighting weekly against four-car dynasties. The program is aided by manufacturer Dodge, but Penske is its only substantial client, which puts everyone involved at a disadvantage.

That includes Busch, a former series champion looking for another run at the title. He wants cars that can win every week, but instead must sit back and watch little brother Kyle make all the trips to Victory Lane while driving a Toyota for Joe Gibbs Racing.

That alone could drive Busch mad. After all, Kyle’s win at Richmond was the 21st of his career — just one behind the 22 victories Kurt’s collected with four more years of experience. Kurt has won just 11 times since Kyle moved to the Cup Series in 2005, the season after Kurt won his title in the inaugural Chase for the championship.

But aside from a feud that lasted most of the 2007 season, the brothers have been, at worst, cordial. Animosity or jealousy is too easy an excuse for Kurt’s abysmal behavior.

It’s a reached a point now that Penske must wonder what exactly Busch can accomplish when his temper is so easily triggered. There’s no way he can a win a championship this way. If his crew hasn’t quit on him yet, it won’t take many more rants like Saturday night’s before it loses all desire to exert any effort for the driver.

Then there’s the criticism Busch leveled at German, who spent almost 10 years with Penske’s IndyCar teams before moving to NASCAR late in the 2008 season. Most employers don’t tolerate their employees attacking management, but Busch seems exempt from workplace standards.

This behavior isn’t new, not for Busch and not for his little brother, who had a similar pattern of losing his cool in the car and directing his ire at his team. But Kyle has seemingly flipped a switch, and realized just how damaging such conduct was to his team and to his chances of winning a Cup title.

Kurt is seven years older but doesn’t seem to have figured that out just yet. Even worse is that Penske, one of the most admired and successful team owners in motorsports history, hasn’t found a way to stop his star driver.

Busch does deserve credit for grinding out finishes far better than what his equipment probably should achieve. And after opening the season as the only driver to notch four consecutive top-10s, he’s not been able to overcome Penske shortcomings the last five races.

“I can’t fix this,” he told his team early Saturday night, “neither can you.”

Those are the words of a defeated driver. Jimmie Johnson and Tony Stewart both hated their race cars Saturday night, and they salvaged eighth- and ninthplace finishes by keeping their cool under trying circumstances.

Busch didn’t do that, and with Penske out of the country there was nobody there to demand he pull himself together and focus on finishing the race. He still managed to finish 22nd, leaving him sixth in the standings and a long way from writing off the season.

If Penske doesn’t step in soon, though, it won’t matter.