Kurt Busch makes it a race 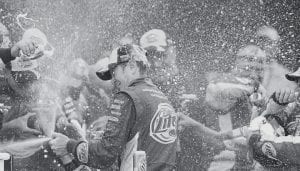 Kurt Busch’s talent behind the wheel of a Nextel Cup car has never been questioned. He started driving for Jack Roush full time in 2001 and in a short span of five years he had won the series title (2004) and made 14 trips to victory lane. While he was experiencing that kind of success at Roush, he decided the grass was greener elsewhere and moved over to Roger Penske’s operation last season.

Busch took over the ride being vacated by the highly respected and fan favorite Rusty Wallace. Everyone involved thought Busch would be able to continue the success that Rusty had in Penske’s Dodge, but by the end of the season the team had managed only one win back at Bristol in March and a very disappointing 12th place finish, which left them out of the Chase.

When the season started this year, the team still was struggling to compete for wins but was consistent enough to keep itself in the Chase. All of that changed when Kurt was docked 100 points by NASCAR in June because of reckless driving on pit road. The penalty dropped Busch six spots in the standings and left him in 17th place.

Since that time, Kurt and his team, now under new crew chief Pat Tryson, have steadily been clawing their way back up the standings in what they hope will end up with a spot in the Chase, now only five races away. Kurt and his team have been on fire as of late as they have made up 243 points on the 12th and final transfer spot in the standings over the last four races.

He entered Pocono in 13th place but his dominating run that saw him lead 175 of the 200 laps on his way to his first victory in 51 races returned him to the top 12, where he now leads Dale Earnhardt Jr. by seven points. Following Jr. in the standings is Busch’s Penske teammate Ryan Newman who sits outside the top 12 by 90 points. Eleventh place driver Martin Truex Jr. leads Busch by a scant 35 points, making the competition for the final two spots a battle among four teams.

That all has to be good news for NASCAR, as there are only five races left before the field for the Chase is set. That gives the sport a race to follow during a time when the air is starting to fill up with football, which is the sport’s main competition during the stretch run of the schedule. The perfect scenario would be for all four drivers to make it to Richmond in September with the opportunity to drive their way into the Chase, but that might be tough with stops at Watkins Glen, Michigan, Bristol and California standing in their way.

Pit notes: Rumors of Dodge’s withdrawal from the sport were put to rest last weekend when the carmaker announced it was resigning with Petty Enterprises. Petty, along with Ray Evernham Motorsports, had signed longterm contracts with Dodge when the manufacturer got back into the sport in 2001. Dodge plans on having four teams next season with 10 cars and there is a chance at least two of those cars might have a different paint scheme than what we see now each week. Evernham has been Dodge’s flagship operation since its return and has enjoyed the sponsorship of Dodge dealers and the UAW, but now it seems Evernham drivers Kasey Kahne and Elliott Sadler may have new sponsorship beginning next season. The biggest rumor has Budweiser on the hood of Kahne’s Dodge and Sadler may be campaigning his Dodge under the banner of a Masterfoods brand such as Snickers. The move would definitely pump more money into Evernham’s operation, which is close to signing a deal that would bring in a partner to also provide more money with which to operate and also allow Evernham to return to what he does best – work on the racing side of the business. The help is definitely needed as Sadler is 23rd in the points with Kahne a very disappointing 27th. Evernham’s third team, driven by Scotty Riggs, sits outside the all-important top 35 in 36th place.