Ky. landowners urged to save hemlocks 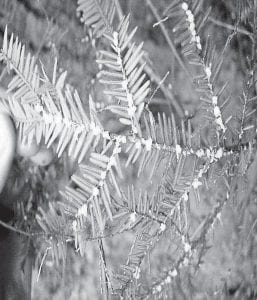 The Kentucky Department of Forestry has begun an initiative to educate private landowners about a threat to hemlock trees and urge them to help fight it.

A tiny insect called the woolly adelgid has killed thousands of eastern hemlocks since it was first found in eastern Kentucky in 2006. Although state and federal officials have used chemical treatments to fight off the insects, they have continued to spread and are now in nearly 30 counties.

The Lexington Herald- Leader reports forestry officials have begun asking landowners to treat hemlock trees in an effort to stop the spread of the woolly adelgid because most of the state’s forested land is in private hands.

Forestry officials say the treatment cost would be about $10 for a 10-inch tree, which would need to be applied every 3-4 years.

“If private landowners don’t step up, there’s going to be a massive loss of hemlock in Kentucky,” said Alice Mandt, coordinator of the hemlock woolly adelgid program for the state Division of Forestry. “If you don’t treat them, they’re going to die. There’s no getting around it.”

She said state officials can’t pay for the chemicals or apply it, but they can show landowners how to do it and they can provide equipment.

“It’s a lot cheaper than cutting a tree down” after it dies, said Rusty Rhea, an entomologist with the U.S. Forest Service who coordinates the agency’s efforts against the insect across the Southeast.

Spring is a good time to check for an insect infestation, which looks like tiny clumps of cotton on the underside of branches.

The ecology in some of the most biologically diverse places in the state would be fundamentally altered if the hemlocks aren’t saved, Mandt said.

“We’d like to be overwhelmed with private landowner calls” seeking help, Mandt said.