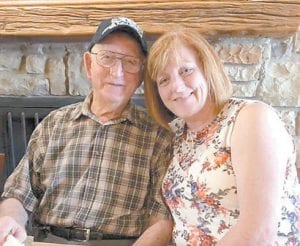 Hello everyone! I hope everyone is doing as well as can be. I don’t know about you however I wish this nightmare called corornavirus would get over.

How are you handling this stay-at-home rule? I read where the coronavirus will magically disappear when the election is over.

I try not to complain too much as so many across the world have lost their lives.

As I’ve said before, being alone doesn’t bother me. Now what does bother me is not being able to head for the mountains of eastern Kentucky that will always be home in my heart as long as there’s breath in my body.

I love heading on the second Saturday of the month to Carcassonne Community Center for the square dance, listening to Sunrise Ridge, of course on Friday nights to Campbell’s Branch also.

I would just love to be able to go drive through the mountains. Somehow it always seemed to help just to drive through Roxana to gaze on the hillside where I rambled as a child.

Sympathy goes to the family of Gary Gentry, son of Lee and Shirley Hogg Gentry. 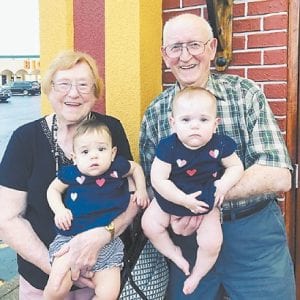 Johnny and Ann Calihan celebrated his 93rd birthday with their two-year-old twin great-granddaughters, Olivia and Claire.

My parents, Clayton and Ora Hall, rented from Vernon Hogg about a mile from Roxana, when I was about seven or eight years old. That was my favorite place to live in all the time was home.

Shirley was the daughter of Vernon Hogg. Vernon had a sister Neil Hampton that came to visit Vernon all the time since Neil lived just a short ways from Vernon.

I grew to love Shirley and Neil like family. I remember when Lee and Shirley’s boys were little. Daddy knew the Gentry brothers, Jack, Ray, and Lee, and there was another that lived away. It is always heartbreaking to hear news of sadness of people in the mountains.

I think I used to try to bring part of the mountains home with me, as I would dig wildflowers when I would be there. I look at a tree that is probably 50 feet or more that is so tall and straight beside the driveway. It’s a blooming poplar tree I dug up at Blackey. For some reason it hasn’t bloomed this year. Probably due to the freeze we had a week or so ago, as it killed the blooms of my iris plants.

I’ve brought wild daises back several times that somehow my son Keith thought were weeds so he whacked them with the weed eater.

Since Mother’s Day Keith has decided the yard needs renovation. I am afraid to turn my head as I don’t know what will be there in the next second.

When Keith bought flowers for the huge circle around the wooden frame and my iron pot, he accidently got impatiens instead of petunias, and too many also. I decided to try to dig a spot up to plant them, as they do better in shade.

With my left wrist being a mess yet, along with trying to balance on my right ankle, I found it almost more than I could handle. I finally decided to take a small stool to sit on. Now this little stool only has three legs. The weather was very windy during the day. The wind was strong it almost blew me off the porch so I waited until the afternoon to work in the yard. I hadn’t planned to work until after 10 p.m. The security light along with the porch light was bright enough.

Now one thing happened that I wasn’t expecting. As I was stretching to plant a flower, somehow the stool flipped me on my butt. I was hoping Keith wouldn’t come around the corner seeing me trying to get up, and even more pleased no traffic was on the road.

Keith placed my two tires that I’ve had for several years on each side of the back deck. When that is complete, I don’t ever want to see another plant for a long time.

Anna brought me a small American holly tree. Of all the places for Keith to plant it, right smack in the center of the back yard.

I have a mimosa tree that I pulled up along a sidewalk in Blackey so many years ago. I did have two and the weather killed one some time ago. This mimosa actually died then sprouts came back. Keith wants to get rid of it; well he better leave it alone.

Friday, May 15, Johnny Calihan celebrated his 93rd birthday. All the family couldn’t get together, but it was a very good day. Johnny received cards from some of his former students, then his granddaughter Ashley brought her two-year-old twins, Claire and Olivia, for a little while.

I wish someone had gotten a picture as I just realized there were four generations,

Johnny and Ann, Sue, Ashley, and the twins.

Johnny received presents, and one was very unusual. I knew Johnny would be getting things from his family, I didn’t know what to get him so I baked cornbread. Keith took it to him fresh from the oven.

When Ann called me to thank me, you would have thought I gave the most precious gift, as they hadn’t eaten lunch. It just so happened Ann had some beans cooked, so she and Johnny had fresh baked cornbread and beans. There was enough cornbread left so Johnny had milk and bread later.

I guess it is true little things means a lot.

My sympathy goes to my first cousin Lorene Deal and family who live at Partridge. Lorene’s husband, Donald Deal, passed away.

I’ve only seen Lorene one time in several years. Her sister Gracie Widner is still hanging on as Gracie is battling cancer.

I finally talked to Pat Wagner who is doing a little better. Les Wagner was in the garden putting out tomato and cabbage plants. I sure wish I lived closer as Les always has such a beautiful garden.

As I was reading Ike Adams’s column, I traveled back in memories as he mentioned baby chicks. Ike called them diddles, and even though we are basically from the same area, things went by different names. Mommy called a baby chickens ‘doodles.’

When Jack and I were first married we raised a huge garden. We had a brood sow, and raised baby pigs. As fast as they were old enough we sold the pigs, then we also had chickens.

I had long hair and my head started itching so badly. When Jack came home I was so upset as I told him I had been around someone that had head lice.

Jack looked through my dark hair and started laughing, asking if I had been in the chicken house. I replied, yes, I had fed the chickens and gathered the eggs. I also had gathered chicken lice, which meant I had to treat my hair like you do for head lice.

So for all the people talking about raising chickens, you better do some research. It is not all fun when you take on the responsibly of things you have no idea of what you are getting into.

When I think back to the first couple of years of Jack and me being married, I was nothing but a kid with three babies, as I had three little ones before I was 20 years old.

The only thing I knew about raising a garden or canning was watching Mommy.

Jack served four years in the Navy, and then worked when he came home, so he sure didn’t know anything either about gardening.

We must have done something right as I canned green beans the same way I had seen Mommy do. You wash your jars, put beans in them, build a frame with rocks, set a tub on the rocks, place the beans in the tub, put old rags around so the jars don’t touch, then build the fire. Keep it burning hard to keep the water boiling for four hours. I didn’t lose any beans.

Sometime later I borrowed a pressure kettle, then bought one. As a matter of fact it is sitting on a shelf in the basement along with the big galvanized kettle I used for canning tomatoes.

I wish I knew some one local that needed canning jars. In fact, if someone in the mountains would let me know, I would put a few dozen in a box and transport them.

Mike and Marcia Caudill, do you think Carcassonne Community Center will ever get to open this year? I really miss the music. I miss seeing you and everyone also.

Now I must lead a boring life to travel a round trip to hear music when I can’t dance. When Cavalry Campus opens I’m coming to the mountains and staying a week.

Hello Darlene, T., Fred and Alice Campbell, and everyone at Campbell’s Branch Community Center. I miss being there.

Thanks for those who have bought my book, The Beauty of A Rose. I still have a few left at $15 and postage, $6.

Well, today is a busy day so I must get busy.