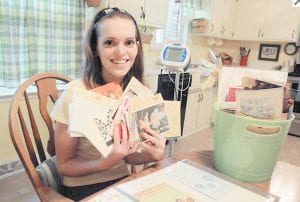 FIGHTING RARE DISEASE — Mallory Chaney holds some of the cards and letters she has received from people offering her emotional support and prayers as she battles acute pancreatitis. (Photo by Neal Cardin/The News-Enterprise)

In her dreams, she eats at buffets. She watches cooking shows on the Food Network and joins her family at the dinner table for meals, but Mallory Chaney can’t have what can’t be administered through a feeding tube.

“Some days are more diffi cult than others,” Chaney said. “In some ways, this has become my new normal because it has been so long since I’ve eaten. I’m used to going through the day and knowing that it’s not an option for me to eat food. I have to be OK with that.”

The former Central Hardin High School soccer star’s life veered in a different direction when doctors discovered a rare pancreatic tumor that needed to be removed immediately. Her life as an involved junior at Western Kentucky University would come to an abrupt halt.

After undergoing a highrisk Whipple procedure to remove parts of her stomach, small intestine, lymph nodes and gallbladder, Chaney now suffers from bouts of acute pancreatitis.

According to the Harvard Medical Journal, in pancreatitis, enzymes that normally are released into the digestive tract begin to damage the pancreas itself. As a result, digestion slows and becomes painful. Other body functions alsocan be affected and the pancreas can become permanently damaged.

Chaney misses eating. She said she feels tired and malnourished, but she has learned to cope with her hunger pangs.

“I told my family it’s OK to eat around me,” Chaney said. “It’s weird that sometimes, even smelling food or seeing food is kind of a comfort to me.”

The complexity of Chaney’s illness forced her to withdraw from classes, leaving behind her friends, school life and Alpha Delti Pi sorority sisters. She is recovering with her family in Elizabethtown.

Chaney, who celebrates her 21st birthday on Thursday, still experiences bouts of pancreatitis, but she remains highly optimistic regardless of her circumstances. She still is the upbeat girl she was before her diagnosis and she owes it all to her faith.

“I used to feel alone because the circumstance is so unique,” Chaney said. “But now I know that I’ve never been alone. God has been with me through it all. As painful and as hard as things are, I know that everything in this world is temporary and some day, none of this is going to matter. We won’t be in pain anymore. We’ll rejoice all the time.”

Many people feel the effects of Chaney’s complications, but one person decided to turn her grief into action. Erin Deattie, Chaney’s best friend and sorority sister, spearheaded a fundraiser to help cover medical bills through www. gofundme.com.

After meeting at the Governer’s Scholar Program at WKU, Deattie and Chaney decided to become college roommates. Since then, they have been attached at the hip.

“ We both were doing random roommates and were a little creeped out,” Deattie said, laughing. “We asked each other some questions about our habits. We’re both messy.”

Devastated by the news of Chaney’s illness, Deattie said the idea for the site first came to her when people from her hometown of Somerset called to ask how they could help.

“I knew there had to be a more direct way to handle donations, so I started the website,” Deattie said. “I got more than $500 in the two days it was up, and I was receiving donations from other ADPis across the country. It was awesome to see a lot of people donate a little bit of money.”

After collecting thousands in donations, Deattie took a trip to Elizabethtown to visit Chaney and deliver the check. Deattie was humbled to see the family’s reaction.

“I wasn’t expecting them to open it in front of me,” she said. “ They were so overwhelmed that people cared about her and wanted to help her. I’ve been really proud of how she’s handling it. She really has had tremendous faith and strength through the whole thing.”

Chaney said she’s thankful to have a friend like Deattie, and considers her to be the “ world’s most loyal BFF.”

After recounting all of the support he has received in the past months, Chaney has a lot of people in the community to thank. She has received donations from AGC Glass Co., her church community at the First Christian Church in Elizabethtown, ADPi and co-workers of her parents.

“It’s hard to express the gratitude for everyone who has been there for us, who has called and sent things to us,” Chaney said. “I’m proud to be in a community where people are so wonderful and so selfless.”

Besides monetary support, Chaney said she also has all the emotional support she needs.