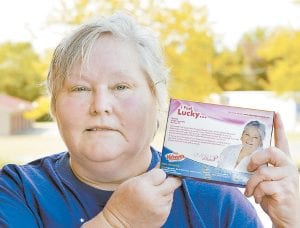 In this undated photo, Teresa Thacker stands in Aurora, Ky., holding up one of the many boxes of macaroni and cheese that feature her photo and profile on being a breast cancer survivor. Thacker, who works at Kenlake Foods in Murray, was selected to be featured nation-wide on the box. (AP Photo/The Ledger, Kyser Lough)

A western Kentucky woman will be looking out at shoppers from the back of macaroni and cheese boxes across the country as the face of a breast cancer awareness campaign.

The image of Teresa Thacker of Aurora will be on display on boxes at Kroger stores after the employee of Kenlake Foods in Murray won an essay contest.

The Murray Ledger & Times
reports that Thacker’s essay was part of Giving Hope a Hand, a Kroger-sponsored program to promote breast cancer awareness, treatment and research. Thacker is a two-time survivor of breast cancer.

A co-worker asked Thacker if she would be interested in writing an essay about her experience with breast cancer.

“I didn’t realize exactly what it was for and thought it was maybe just for a newsletter or a website,” Thacker said. “But then a lady calls me and tells me they want to use my essay and if I want to be on a box of macaroni and cheese or Wheat Thins!”

Thacker’s essay focuses on how her faith and love of those close to her helped her hang on. She tells others facing the disease to “Never give up! Never give in! Only what is in your heart and soul matters, and there are always better days ahead. I am stronger than I ever knew, and so are you.”

Thacker was first diagnosed with breast cancer in 1990 and she beat the disease without chemotherapy.

“Once you have had it you don’t dwell on it and you think you won’t have it again,” Thacker said.

But, the disease returned more aggressively 15 years later. Thacker chose chemotherapy and relied on people close to her.

“I leaned on my friends, family, my better half and my faith. You do a lot of praying. That’s when you find out what’s really important,” Thacker said. “No one should have to go through it once, let alone twice.”

Thacker’s supervisor at Kenlake Foods, Ricky Sirls, watched her go through the second round of cancer and said it was her spirit and attitude that helped her through it.

“I’ve known several people who have been through the fight and a good attitude is what carries them through. She is one of the ones that has that good attitude,” Sirls said.

Sirls said Thacker brought the boxes of macaroni and cheese in to a recent morning employee meeting and everyone was surprised and very proud of her.

“I’m hoping it brings a good response to the area,” Thacker said of the boxes.