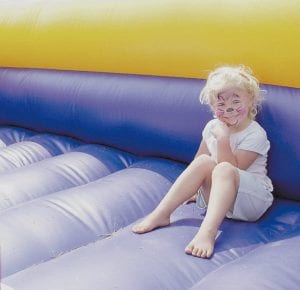 ALL SMILES – Alexis Johnson, 4, took a break from playing on one of the inflatable play centers the City of Whitesburg rented as part of its “Labor Day Bash” at Riverside Park. The play centers belong to X-Treme Fun Inflatables, a new company owned by brothers Mick and Greg Polly of Whitesburg. Alexis, who had her face painted shortly before this photo was taken, is the daughter of Joey and Stephanie Johnson of Whitesburg. (Photo by Sally Barto) 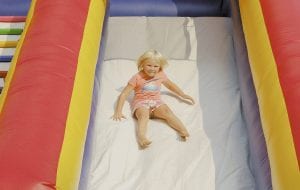 Above, Ciara McBee, 4, enjoyed sliding on a brand-new inflatable play station the City of Whitesburg rented for its Labor Day celebration Monday from XTreme Fun Inflatables, a new company based in Whitesburg. The company is owned by brothers Mick and Greg Polly. Pictured at left, Doug Benton gave a tractor ride to his two-year-old grandson Max Baker during the “Labor Day Bash” at Riverside Park. (Photos by Chris Anderson) 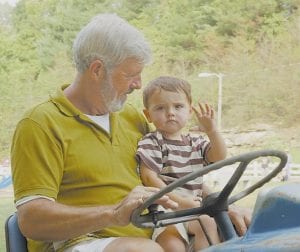