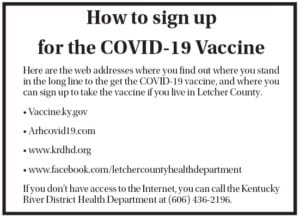 If you don’t have access to the Internet, you can call the Kentucky River District Health Department at (606) 436-2196.

The lack of good information about how to get the COVID-19 vaccine, and the trickle of doses coming into Letcher County is leading to frustrations for health professionals and patients, as the patients clog phone lines trying to get appointments to be immunized.

Less than 10 percent of the county’s population is expected to have received at least a first dose by the weekend. That will include 500 doses delivered for teachers and other school personnel in the two school systems that are to be given Thursday and Friday.

And even with the low totals here, the county is still ahead of much of the rest of the country. Just 7.9 percent of U.S. residents have received at least a first dose.

The low figures reinforce statements last week by members of President Joe Biden’s administration that the COVID-19 response prior to his inauguration was much worse than they had expected.

The low numbers are partly due to supply, and partly to the lack of any real system for distributing the vaccine and getting into people’s arms. Gov. Andy Beshear announced Tuesday that the federal government will be increasing the state’s allocation of vaccines by another 5 percent next week, a total increase of 22 percent since Biden took office on January 20.

President Biden is also now planning for the vaccines to be distributed to Federally Qualified Health Centers (FQHCs), which see about 19 percent of all patients across the United States, and many of which had not been placed in the pipeline to receive vaccines previously. Mike Caudill, chief executive officer of Mountain Comprehensive Health Corporation, which is an FQHC and Rural Health Clinic, said he had heard it was part of Biden’s plan, but had no details yet.

“They act like there’s some big secret to getting them out, but there is no secret to it,” Caudill said. “Get them to us and we’ll get them out to our patients.”

Many Letcher Countians are signing up at Pikeville Medical Center, where the hospital is giving 700 shots per day. The Kentucky River District Health Department has gotten only about 700 shots total for Letcher County, not counting those given by ARH, since the vaccine was first made available in late December. Kentucky River District Health Department Director Scott Lockard said he is encouraging people to go wherever they can to get vaccinated.

“I don’t have all the numbers for the ARH system, but when you look at what’s come in, non-school related vaccines, we’ve gotten about 2,100 doses, non-education,” Lockard said, “For seven counties. Not much at all. That initial push out, I think we got 800 doses, and now some of this is boost doses.”

Lockard said the department is following state guidelines and using at least 90 percent of its doses within seven days of receiving them. Not so some other sites in the U.S. The White House has warned some agencies that are saving doses for the required second doses to stop hoarding the vaccine and give it before it goes bad, getting at least a first shot into patients’ arms, and has assured them that there will be enough boost doses when they are needed.

The vaccine has been shown to provide at least some protection from the coronavirus after a single dose, though both the Moderna and Pfizer vaccine both require a booster shot to reach their full effectiveness of 94-95 percent.

There has also been concern because of the low percentage of shots that have been given by Walgreen’s and CVS pharmacies, which are under federal contract to provide shots to residents of long-term care facilities. As of last week, the pharmacy chains had delivered less than half of the doses they had been allocated.

Caudill said he believes those doses should be taken away from those companies and redistributed.

“If nothing else, they should give them to us and let us give them to our patients while they’re still valid,” Caudill said.

As the vaccine rolls out, there is more concern as the Centers for Disease Control announces new variants of the virus, some of which carry more serious health effects, and some of which are more contagious. A variant from the United Kingdom has been found in several states, including Kentucky, and a South African variant has also been found in other states.

As the number of cases has risen, the accuracy of the count has begun to slip, with a recent federal report listing only two cumulative deaths from the virus, even though state figures list six deaths. The cumulative number apparently does not include nursing home deaths. The latest figures from the state show 12 patients in Letcher Manor Nursing home died from COVID-19 in 2020, and another eight in 2021.