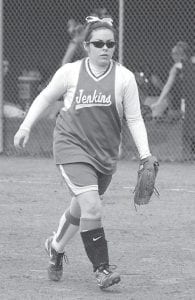 Jenkins pitcher Rachel Thacker threw a perfect game in the Lady Cavs’ big win over Leslie County on Monday evening. Thacker struck out 6 of the 9 batters she faced in the threeinning game. (Photo by Chris Anderson)

Helped by a perfect game by pitcher Rachel Thacker, 53rd District champion Jenkins advanced to the second round of the 14th Region fast-pitch softball tournament on Monday by crushing Leslie County 19-0 in just three innings. Letcher County Central, which finished second in the district, was eliminated from the tourney by Perry County Central.

After Thacker delivered a strike for the first pitch of the game being held at Irvine in Estill County, the skies opened up and unleashed a drenching rain that caused a 2-1/2 hour delay. When the game, which originally started at 3:55, resumed at 6:30, Thacker struck out the side and the Lady Cavs scored 14 runs in their first time at the plate.

Jenkins scored five more runs in the second inning. For the game, Brooke Webb drove in three of the 19 runs and Thacker struck out six of the nine batters she faced before the game was called. 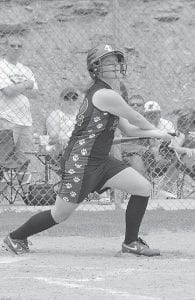 Lady Cougar Sierra Kiser followed the ball while batting during her team’s loss to Perry Central in the opening round of the 14th Region Softball Tournament in Estill County on Monday. (Photo by Chris Anderson)

Letcher Central and Jenkins met in last week’s district title game after the Lady Cougars easily defeated Knott Central, 12-2. The Lady Cavs advanced to the final game with an automatic bye after finishing the regular season with a strong record of 26-5.

The Lady Cavs took the early lead in the district final by scoring two runs in the bottom of the first on a single by Hillary Brashear and a double by Brooke Webb. The second inning was much the same, with a two-out rally that began with Whitney Gibson and Allie Goff both hitting singles and scoring when Emily Walker reached base on an error.

Letcher Central’s offense began to come alive after being shut down by Jenkins pitcher Rachel Thacker with Sierra Kiser’s single to center. An error at second base during Katie Mynster’s at-bat scored Kiser to cut the Jenkins lead to 4-1. Four more Jenkins runs in the fourth and two more in the fifth were more than enough to put away the Lady Cougars, who could come up with only one more run in the sixth. The 10-2 victory marked the second straight district title for the Lady Cavs.