LADY CAVS ARE 2-6 ON THE SEASON 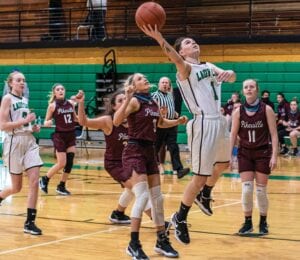 — Jenkins won one game last week and lost four to leave their record at 2 wins and six losses going into Tuesday’s game at Paintsville. This photo shows Jenkins senior Jerrica Thacker laying the ball up in 59th District action against Pikeville last week at home. Thacker led her team with 12 points in the 79-40 loss to the defending 15th Region champions. The Lady Cavaliers bounced back two nights later to pick up their second win of the season by defeating Phelps on the road by a score of 85-64. Jenkins then fell at home to Montgomery County (77-51) and on the road at Johnson Central (64-48) and at Prestonsburg (90-74). (Photo by Chris Anderson)