Lady Cavs are ‘A’ champs 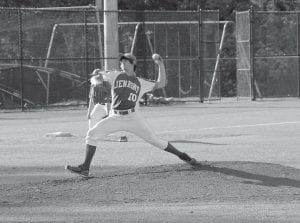 CAVS FALL TO PIKEVILLE — Jenkins pitcher Tim Seals delivered a fastball in his team’s loss to Pikeville Monday evening. The Cavaliers fell to 2-10 on the season. (Photo by Chris Anderson)

The Jenkins Lady Cavaliers softball team has advanced to the All “A” State Tournament in Jefferson County after winning the 14th Region All “A” Tournament for the second year in a row.

The state tournament will be held on May 9 and 10 at Skyview Park in Jeffersontown, near Louisville.

The Lady Cavs won the 14th Region title with an easy 19-0 win over the Cordia Lady Lions in the championship game of the tournament held last week at Jackson.

Senior Rachel Thacker turned in another strong performance by pitching a two-hit shutout while striking out 11 Lady Lions batters. The Lady Cavs played error-free defense and their batters connected for 11 base hits, took advantage of 17 walks, and utilized aggressive base running in tallying their 19 runs.

The Lady Cavs got off to a slow start with a scoreless first inning and then scored in every inning thereafter, capped off by a 10-run sixth in which 13 batters went to the plate.

The Jenkins team began All “A” regional play in Hazard by defeating an outmanned Lady Bulldogs team 19-1. Thacker pitched strong in that game as well, and offensively the Lady Cavs pounded out 18 base hits led by Emily Walker and Whitney Gibson with three hits apiece, and Brooke Webb with four base hits including a triple.

After their first-round win over Hazard, the Lady Cavs traveled to Jackson to face a tough Jackson City team in the semifinals. Jenkins could muster only three runs in that game, but it would prove to be enough as Thacker was impressive again pitching another shutout.

All the scoring came in the Jenkins half of the third inning as centerfielder Ali Goff started a rally with a single. Goff advanced to third on a base hit by right fielder Sarah Belcher, who subsequently stole second. Goff and Belcher scored on a base hit by catcher Hillary Brashear.

Later in the third inning, with two outs, Brooke Webb reached on an error allowing Brashear to advance to third. Webb was then caught in a run down while attempting to steal second, but not before Brashear crossed the plate with the third run.

The Lady Cavs will play in the All A state tournament on May 9th and 10th at Skyview Park in Jeffersontown, Kentucky. Good luck to the Lady Cavs as they represent Jenkins, Letcher County, and the 14th Region in this event.