Lady Cavs back on roll as tournament begins 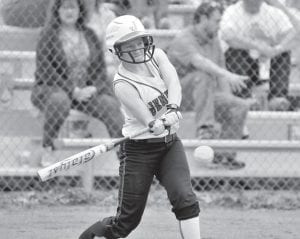 The Lady Cavs began play in the 14th Region All ‘A’ Classic against Hazard on Tuesday.

On April 5, Jenkins played a 53rd District game at home against Knott County Central. After Knott Central was unable to reach base in the first inning, Brittany Mullins hit a double for Jenkins and scored on a single from Mercedes Boggs.

The Lady Cavs did add another run in the bottom of the third inning after Melissa Bartley singled, stole second, and was doubled in by Boggs for a 2-0 lead.

Jenkins added eight runs in the fifth inning on five hits and three KCC errors. After Charity Niece reached on a passed ball, Caitlynn Estevez singled before Lexi Stambaugh doubled both runners in. After Whitney Creech singled and stole second, Ashley Niece singled to bring Creech in. Brittany Mullins reached base on an error, Melissa Bartley was walked, and Boggs reached base on another error. Charity Niece singled to bring in Mullins before Bartley and Boggs scored on an error to end the game with a win of 10-0.

Caitlynn Estevez picked up the win. She gave up one hit, two walks, and struck out seven.

The Jenkins Lady Cavs picked up an ugly win against the Belfry Lady Pirates on April 2.

Belfry took a one run lead after connecting for three hits in the first inning. Jenkins answered with two runs in the bottom of the inning. Lexi Stambaugh scored Whitney Creech on a fielder’s choice and Mercedes Boggs brought in Melissa Bartley on a sacrifice fly. Jenkins added runs in the third and fourth to take a 4-1 lead.

In the sixth inning, Belfry scored five runs on three hits, four walks and an error to take a 6-4 lead. In the bottom of the seventh, Jenkins took advantage of three Belfry errors to send three runs across the plate.

Lexi Stambaugh scored the winning run when she came home on a throwing error after she had gone to third base on a passed ball. The two hits Jenkins had came from Mercedes Boggs and Caitlynn Estevez.