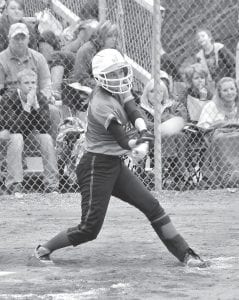 Jenkins senior Ashley Wright smacked a fourth-inning double during the Lady Cavaliers’ 11-1 victory over Clintwood last week. Wright was 3-3 with a single, two doubles, a run scored, and an RBI in the game. The Lady Cavs started the season with a 3-0 record. (Photo by Chris Anderson)

The Jenkins Lady Cavaliers picked up their third straight win of the season with a 3-2 win over the Harlan Lady Dragons on Friday night.

With senior Kayla Stambaugh on the mound for Jenkins, Harlan led off the game with a single, but that would be all for them in their half of the first inning. In the bottom of the first, Charity Niece smacked a double to left field and Mercedes Boggs singled to score Niece and give Jenkins a 1-0 lead.

Harlan got three straight singles from Mills, Ledford, and Fields in the fourth. Mills scored on one of the hits and Ledford scored on a passed ball to give Harlan a 2-1 lead.

In the bottom of the fifth, Kayla Stambaugh led off with a single, stole second and third, and then scored when Melissa Bartley smacked a triple to left field. Mercedes Boggs then hit the ball to third to score Bartley and allow Jenkins to re-take the lead at 3-2.

Stambaugh, who had 11 strikeouts, fanned the side in Harlan’s seventh inning as the Lady Cavs notched their third win.

Jenkins easily defeated Clintwood, Va., earlier last week for its second win. Freshman Caitlynn Estevez earned the start and sat Clintwood down in order in the first inning before the Lady Cavs scored eight runs of their own.

Kayla Stambaugh led off the inning with a walk and Charity Niece reached base on an error before Mercedes Boggs, Ashley Niece and Ashley Wright each knocked singles and Estevez got to first on an error. With the lineup now flipped, Stambaugh hit a single and Niece knocked a double.

Clintwood started off the second inning with two singles and a double sandwiched between a fielder’s choice, but the threat stopped there.

Stambaugh singled for Jenkins in the bottom of the second, stole second and scored on a single by Melissa Bartley.

After Ashley Niece led off the fifth inning with a walk, Reanna Elswick pinch ran for Niece and scored on a double by Ashley Wright. Kayla Stambaugh singled and moved to second on a Charity Niece ground out, then stole third before a single by Bartley made the final score 11-1.

Estevez got the complete game victory, giving up only five hits and striking out four. Clintwood committed three errors, while Jenkins had one.