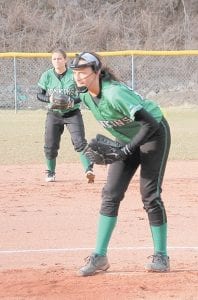 Jenkins pitcher Caitlynn Estevez and the Lady Cavaliers softball team are both off to 3-0 starts. Also pictured is shortstop Mercedes Boggs.

The Jenkins Lady Cavaliers have started the softball season off with a 3-0 record, defeating Harlan Independent, Harlan County and Belfry.

Against Harlan Independent, Jenkins jumped to an early 6-0 lead after two innings. Alexis Stambaugh led off the second inning with a solo home run to left field. Jenkins added five runs in the fifth inning with four hits. Ally DePriest hit a double and Harlan haurt itself further by committing two more errors to bring the total of miscues to five at that point. Harlan scored two runs in the third inning on four hits and a hit batter.

The Lady Cavs took the win 12-2 in five innings. Charity Niece was two for two at the plate and Ally DePreist was two for three. Caitlynn Estevez picked up the win while giving up five hits, three walks, and collecting two strikeouts.

In the game against Harlan County, Jenkins fell behind 5-1 after only two innings. The Lady Cavs lone run came from a Mercedes Boggs double and two passed balls. 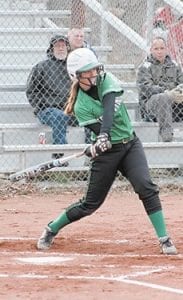 Alexis Stambaugh takes aim on a ball she hit for a solo homer against Harlan Independent.

Boggs and DePreist both went two for four at the plate. Caitlynn Estevez gave up four hits and seven walks and struck out nine to get the 10-7 win.

The game against Belfry on Saturday was called after four innings under the “mercy rule” after Jenkins took a 19-2. Belfry’s downfall was the lack of pitching as the Lady Pirates walked 14 batters and hit four others.