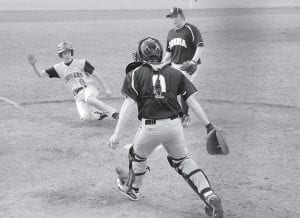 COUGARS ADVANCE — Letcher County Central’s Caleb Baker was safe at home, scoring after a passed ball in the Cougars’ 15-0 win over Cordia Monday in the 53rd District baseball tournament. The Cougars advanced to play Knott County Central Tuesday night in the championship game. The Patriots advanced to the title game by easily defeating the Jenkins Cavaliers, 11-0, in five innings. (Photo by Chris Anderson)

The regular season came to a close for the Jenkins High School Lady Cav softball team with a home game against the Pikeville Lady Panthers on May 16. They also played games against Letcher County Central and Sheldon Clark during the week. The Lady Cavs won all three of these games to finish the regular season with a record of 20 wins against 11 losses.

The Lady Cavs faced county rival Letcher County Central at home May 11, and the Lady Cougars mounted an early threat in the top of the first inning.

Leadoff batter Chloe Wynn opened the game with a double and second baseman Tekiah Caudill was hit by a pitch to put runners on first and second. With one out, third baseman Micca Boggs drew a walk to load the bases. Jenkins pitcher Rachel Thacker struck out the next two Lady Cougar batters to thwart the threat and end the inning.

The Lady Cavs scored two runs in their half of the first inning when right fielder Sarah Belcher reached on an error and shortstop Emily Walker singled. Belcher and Walker advanced to second and third on a passed ball and they both scored on a sharply hit single by catcher Hillary Brashear. After the Lady Cougar scoring threat in the first inning, Thacker found her groove and held the Lady Cougars to two hits and three base runners for the final six innings. The Lady Cavs added another run in the bottom of the second inning when designated hitter Sierra Kiser led off with a single and advanced to second on a ground out. Kiser then advanced to third when Belcher reached on an error for the second consecutive inning. Kiser scored on a single by Walker making the score 3-0 in favor of the Lady Cavs. 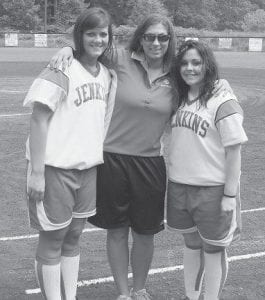 The Lady Cavs added two more runs with a two-out rally in the bottom of the fourth inning when with Belcher reached on an error for the third time in the game. She then stole second and scored on Walker’s double, her third hit of the game. Walker later stole third and scored on a passed ball. The five-run cushion was more than enough for Thacker as she preserved the win holding the Lady Cougars scoreless, allowing only 3 hits and 1 walk while striking out 11 Lady Cougar batters.

The Lady Cavs traveled to Knott County Central May 14 to take on the Sheldon Clark Lady Cardinals in the second game of a threeteam double header. The Lady Cavs handily defeated an outmanned Sheldon Clark team 17-0 in four innings.

The Lady Cav batters pounded out 12 base hits and stole 12 bases to earn the victory. Senior pitcher Rachel Thacker worked three scoreless innings and junior Brooke Webb pitched a scoreless fourth to shut out the Lady Cardinals. The tandem of Thacker and Webb held the Lady Cardinals hitless while allowing only two base runners for the game.

Every Lady Cav starter scored at least one run with the highlight of the game being shortstop Emily Walker’s inside-the-park home run in the third inning.

A game with the Lady Panthers from Pikeville High School closed out the regular season for the Lady Cavs. Senior Day festivities were held prior to the game and honored the two graduating seniors, pitcher Rachel Thacker and first baseman Whitney Gibson. Thacker and Gibson have played together for five years and have played a big role in Coach April Charles’s rebuilding of the Jenkins program. Thacker has been the starting varsity pitcher since she was in the seventh grade and Gibson has been a stalwart at first base since she was in the eighth grade. Both will be sorely missed next season.

In what has become a consistent pattern this season, the Lady Cavs took advantage of excellent pitching, solid defense, and aggressive base running to earn the victory. The Lady Cavs struck early, scoring one run in the bottom of the first inning when catcher Hillary Brashear singled with two outs. Mercedes Boggs entered as a courtesy runner for Brashear and promptly stole second base and then successfully executed a delayed steal of third base. Second baseman Brooke Webb worked a full count base on balls and also stole second. Boggs then stole home when the Lady Panthers attempted to throw out Webb at second base.

The Lady Cavs added a second run in the bottom of the second inning when centerfielder Ali Goff led off the inning with a single and advanced to second on a Pikeville throwing error. She would later score on a double to deep right field by Thacker making the score 2-0 in favor of the Lady Cavs.

The Lady Cavs scored only two runs but that was enough as Thacker provided a sparkling Senior Day performance to lead the Lady Cavs to victory. She shut out the Lady Panthers, allowing only three hits with one walk and striking out eight Pikeville batters to earn her 92nd career win as a Lady Cav. The Lady Cavs will be in action next facing the Cordia Lady Lions on May 18 in the first round of the 53rd District tournament at Cordia. The Letcher County Central Lady Cougars will also play a first round game on May 18 against the Knott County Central Lady Patriots. The two first-round winners will then play at Cordia for the district championship on May 19.