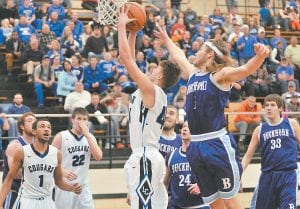 Letcher Central freshman Gregory Kincer drove in for a layup in the opening round of the 14th Region Tournament last week at Knott County Central High School in Hindman. The Cougars fell to Buckhorn in the game, 48-42, bringing an end to their season. Ready to rebound for Letcher Central was junior forward Torell Carter. No. 22 for LCC is sophomore forward Elijah Raglin. (Photo by Chris Anderson)

Before Saturday night’s loss, the Lady Cavaliers were the last county team left in post-season play after the Letcher County Central Cougars suffered a disappointing loss to Buckhorn in opening round of the boys’ 14th Region Tournament, held at Knott County Central.

The Lady Cavailers advanced to the region final with a first-round win over Perry Central, 75-65, and a second-round win over host Powell County, 67-58.

Creech and Stambaugh led Jenkins in rebounding in the opener, hauling in 14 and 13, respectively.

Creech also led the Lady Cavaliers in scoring in the second round win over Powell County with 48. Stambaugh had 14 points. Melissa Bartley scored two points, while Ariana Bentley, Emilee Rose, and Shea Rose contributed one point each. Creech and Stambaugh again led their team in rebounding with eight and seven.

The season for the Letcher County Central boys’ team ended with a 48-42 loss to Buckhorn High School in the tourney held at Hindman.

The Cougars, behind some deadly outside shooting, raced out to 12-4 lead with 2:47 left in the first quarter and 14-6 heading into the second quarter of the March 3 game.

The Cougars then struggled offensively against the Wildcats’ 3-2 zone and Buckhorn ran off eight straight points to tie the score at 14-14 with 2:17 left in the first half.

Torell Carter, who had very few touches in the first half, scored twice and dished off to Gregory Kincer for a lay-up to give LCC a 20-16 lead at the half.

The Cougars continued to struggle against Buckhorn’s zone defense and turned the ball over on three of their first four offensive possessions in the third quarter, opening the door for another Buckhorn 8-0 run to give the Wildcats a 24-20 lead at the 5:10 mark. The Cougars reclaimed the lead at 26-24 on Austin Caudill’s trey midway of the third quarter. Austin Banks’s trey gave LCC a 29-28 lead heading into the fourth quarter.

The 14th Region Player of the Year, senior guard Connor Hoskins, scored on a layup to push the Wildcats back in front 33-32 with 5:22 left to play.

The Cougars closed to within 41-40 on another pair of Torell Carter free throws with 2:53 left to play.

Buckhorn hung on down the stretch at the free throw line, converting 7 of 10 chances for the victory.

Josh Crank’s 18 points and five rebounds were team highs for the 17-15 Wildcats. Connor Hoskins was limited to 10 points by the excellent defense by Letcher Central junior guard Austin Banks. Banks scored nine points for the Cougars, who closed with a 21-10 record.

Lecher Central won the rebounding battle 22-18, but committed 13 turnovers while the Wildcats made just five turnovers.