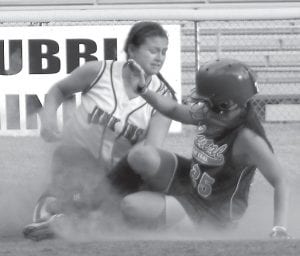 The Jenkins Lady Cavaliers improved their record to 18-4 with a 12-1 win over district rival Letcher County Central.

Kayla Stambaugh took the mound in the April 19 game against Makayley Johnson. As visitors, the Lady Cavs batted first. Kayla Stambaugh got things started with a single and stole second and third. Melissa Bartley reached base on a walk, and Stambaugh and Bartley worked a double steal as Stambaugh stole home to give Jenkins the early lead 1-0. Bartley stole third and Mercedes Boggs picked up an RBI with a single.

In the second inning, Caitlynn Estevez reached base on a walk, and Ashley Niece was hit by a pitch. Brittany Mullins doubled, and Estevez was thrown out at home. Ashley Wright singled to bring in Niece to take a 3-0 lead.

In the third, Whitney Creech got on with a bunt and reached second on a passed ball. Ashley Niece came up big with a single to score Creech.

In the fourth, Kayla Stambaugh got on from a dropped fly ball and stole second. Melissa Bartley singled and Mercedes Boggs got a walk, followed by a walk for Randee Phillips to score Stambaugh. Caitlynn Estevez singled to give Jenkins the 7-0 lead. 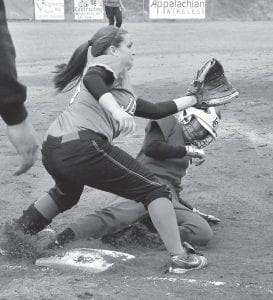 Letcher Central’s Cheyenne Stidham slid safely into third base while Jenkins’s Mercedes Boggs waited to receive the throw from home plate during the Lady Cavs’ win. (Photo by Chris Anderson)

In the fifth inning, Combs led off with a walk for LCC. Stidham reached base on an error and Coots singled in Combs to make it 7-1.

In the seventh inning, Jenkins sent nine batters to the plate scoring five runs, getting singles from Bartley, Estevez, and Mullins as well as doubles from Boggs and Ashley Niece, whose double hit at the top of the fence in left field. The Cavs got a sacrifice fly by Stambaugh, and Charity Niece was hit by a pitch.

Makayley Johnson gave up 12 runs on 15 hits with six strikeouts. Kayla Stambaugh picked up her 13th win as she gave up four hits and one unearned run, and had six strikeouts.

Jenkins traveled to Perry Coun- ty Central on April 17 for a matchup of two of the best pitchers in the 14th Region, Kayla Stambaugh and Whitney Back.

The game then turned into a pitchers’ duel. In the third, PCC made a threat, getting a single and a walk, and the Cavs made a throwing error to put runners on second and third. Stambaugh settled down and stuck out Sebastian and Kemper to end the threat.

In the sixth, PCC got a single and Jenkins committed two throwing errors to give PCC a run.

In the seventh inning, with Jenkins up 2-1 with one out, Jenkins made a fielding error, putting a runner on. Combs stole second and Whitney Back doubled to bring her in to tie the game 2-2. Back moved to third with two outs and attempted to score on a passed ball. Catcher Charity Niece made a perfect throw back to Kayla Stambaugh to tag Back out and send the game to extra innings.

In the eighth inning, Stambaugh led off with a perfect bunt down the third base line then stole second. Randee Phillips singled to drive in the winning run as PCC could not get anything going in the bottom half.

Jenkins picked up its17th win with a 3-2 victory. Back gave up seven hits and three runs, one a homerun, and had 12 strikeouts. Stambaugh picked up the win, giving up six hits, two unearned runs and 10 strikeouts.

In the first inning, Melissa Bartley reached base on an error, and Mercedes Boggs and Charity Niece both reached base on walks. Ashley Niece came up with a single to bring in two runs, and Caitlynn Estevez also singled to score two runs.

In the bottom of the first, Pike Central got a runner on with a walk and had two singles to score two runs and cut the lead to 4-2.

In the second, Ashley Wright reached base on an error and moved around to third, and Kayla Stambaugh laid down a sacrifice bunt to score Wright.

In the bottom half, Pike Central answered with two singles and a sacrifice bunt to score one run.

In the third, Ashley Niece reached base on a single, Caitlynn Estevez reached base on a fielding error, and Brittany Mullins singled, scoring Niece. Ashley Wright then singled, Kayla Stambaugh singled in Wright and Stambaugh scored on a Melissa Bartley single. After three innings the Lady Cavs held a 9-3 lead.

In the fourth, Jenkins got singles from Charity Niece, Caitlynn Estevez, and Ashley Wright. Wright’s single scored Niece and Estevez.

In the fifth inning, Jenkins added a run off of two singles from Melissa Bartley and Whitney Creech. In the bottom of the fifth, Pike Central added four runs on four walks and a Cavalier error with two outs. Stambaugh took the mound to get the next batter on a strikeout to end the threat.

In the sixth inning, Caitlynn Estevez singled, Alexis Stambaugh pinch ran for Estevez and stole second, and Kayla Stambaugh doubled to center to score Alexis to take a 13-7 lead. Kayla Stambaugh struck out the side in the sixth. Pike Central could not mount a threat in the seventh.

Caitlynn Estevez picked up the win, giving up five hits and having six strikeouts. Stambaugh had five strikeouts.