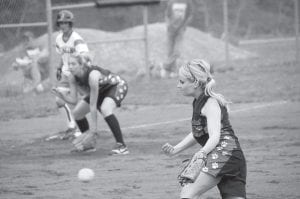 When the Harlan County High School Lady Bears visited on April 29, both teams struggled to generate any offense in this match-up that proved to be a pitcher’s duel soaked by a steady rain during most of the game. The Lady Bears threatened in the top of the first when base hits from catcher Natashia Pennington and pitcher Courtney Lewis put runners on first and third with only one out.

The Lady Cav defense stepped up to end the threat as centerfielder Ali Goff caught a fly ball off the bat of Lady Bear left fielder Bobbi Johnson and threw a strike to home plate to gun down Pennington for an inning-ending double play as she attempted to tag and score from third. The Lady Cav defense would take advantage of a double play again in the second inning to negate a leadoff base hit by Lady Bear centerfielder Johnnie Parker. Shortstop Emily Walker snared a line drive off the bat of Lady Bear second baseman Ashley Fee and threw to first to double up Parker who was caught off the bag.

The Lady Bears threatened to score again in the fourth inning when Lewis reached on an error and Johnson followed with a base hit, putting runners on second and third with one out. The Lady Cav defense responded to end the inning as Parker grounded out to the pitcher and Fee grounded out to the third baseman.

The Lady Cav batters generated very little offense with only three hits through the first five innings. The Lady Bear defense also took advantage of a double play in the bottom of the fourth inning to squelch a Lady Cav threat.

The Lady Cavs put base runners on first and second with one out, as a result of consecutive singles by Brooke Webb and Whitney Gibson. Lady Bear left fielder Bobbi Johnson made a great defensive play snagging Kayla Stambaugh’s soft line drive on the run and firing a throw to first to double off Webb and end the inning.

As the sun broke out during the rain showers forming a rainbow over Pine Mountain, the Lady Cavs broke the scoreless tie with two runs in the bottom of the sixth inning. Second basemen Sarah Belcher led off with a walk then advanced to second on a passed ball and later scored on Walker’s double. Walker stole third and then scored on a double by catcher Hillary Brashear. Pitcher Rachel Thacker preserved the lead and the win with three ground ball outs by Lady Bear batters to earn the Lady Cavs a hard-fought 2-0 victory.

Both pitchers turned in gutsy performances with Thacker shutting out the Lady Bears allowing five hits, two walks, and striking out four. Lewis gave up five hits with only one walk, allowing two runs, while striking out eight.