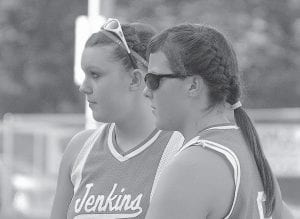 Jenkins infielders Brooke Webb, left, and Whitney Gibson looked on in frustration between innings of their team’s loss in the 14th Region title game. (Photo by Chris Anderson)

Following a dominating win over Leslie County in the first round of the 14th Region Tournament and last at-bat heroics by Whitney Gibson in the second round, the Jenkins Lady Cavaliers looked poised to give defending champion Estill County a run for its money in its title defense on May 28.

In the second round on May 27 vs. Jackson City, the Lady Cavs took a 1-1 tie into the bottom of the seventh when Whitney Gibson came through with a hard base hit up the middle to drive home teammate Sarah Belcher and give Jenkins the exciting win. That win would set up a championship match-up against the defending champion Lady Engineers of Estill County, who have won both 14th Region championships since joining the region two years ago and hosted this year’s tournament. With the momentum of the May 27 win still pushing them, the Lady Cavs looked to derail the Lady Engineers.

A base hit by pitcher Rachel Thacker and an error on the catcher during Hillary Brashear’s at bat put two on for the Lady Cavs, but they could not produce any runs as the Lady Engineers entered cruise control and dominated the game from there. Thacker’s base hit would prove to be the only Jenkins hit of the day.

The Lady Engineers scored one run in the bottom of the first on a pair of singles to take the early lead. More damaged was contained when the third out was tagged at second on a throw from first baseman Gibson. Jenkins did not have another base runner until the fourth inning when Brooke Webb drew a walk before being stranded on first.

The next inning, with Estill County now leading 3-0, Sarah Belcher drew a leadoff walk for the Lady Cavs before stealing second and being sacrificed to third by Tazshia Hall. Belcher, like Webb before her, was left on base as the Lady Cavs could once again do nothing with the Estill pitching.

By this time, the downhearted Jenkins team could not gain any momentum and could only watch as the Lady Engineers cruised to their three-peat championship, winning the game 5-0. The Lady Cavs had only one hit on the day, a single by Rachel Thacker. Brooke Webb drew a walk while Sarah Belcher drew two. Belcher also stole a base. Hillary Brasher and Emily Walker both reached base on errors.

The Lady Cavs finish their season an impressive 29-6, finishing a campaign that saw them bring home the school’s first All- A Regional championship and a repeat District championship. Another highlight of the season was a phenomenal 14-game win streak. With pitcher Rachel Thacker being the only rising senior, look for a lot more noise from this young Lady Cavalier squad next season.