Lady Cavs get another ‘A’ 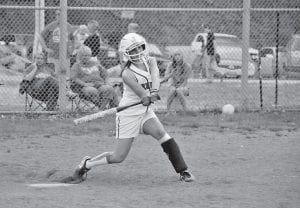 For the third consecutive year, the Jenkins Lady Cavs have been crowned 14th Region All ‘A’ champions.

In the process of winning the tournament the Lady Cavs dominated the field, defeating Leslie County 16-1, Lee County 20-1, and Hazard 15-0 in the title game.

In the championship game against Hazard, the Lady Cavs jumped to an early lead, scoring two runs in the first inning on backto back doubles by Emily Walker and Sierra Kiser followed by an RBI single from Kayla Stambaugh.

The second provided a big Lady Cav rally as they sent 14 batters to the plate and pounded 10 base hits to score nine runs and take an 11-0 lead. The big hit of the rally was a bases loaded grand slam homerun smacked over the left field fence by shortstop Emily Walker for her second homerun of the tournament.

After a scoreless third inning, the Lady Cavs took advantage of two walks and collected four base hits to score four runs and end the game after four innings. Leading the Lady Cav off ensive attack were Emily Walker with five RBI and Kayla Stambaugh and Hillary Brashear with three base hits apiece. Brook Webb was superb on the mound for the Lady Cavs in the victory, hurling a perfect game and striking out seven of the 12 batters she faced.

After winning the All ‘A’ Regional tournament, the Lady Cavs’ record now stands at 17 wins against 2 losses and they have earned the right to participate in the All ‘A’ Classic State Tournament at Skyview Park in Jeff ersontown on May 8 and 9.