Lady Cavs get most hits, but can’t score 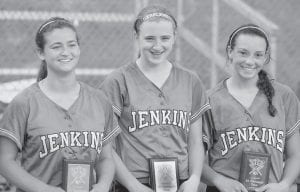 The Jenkins Lady Cavalier outhit Estill County, four to two, but couldn’t turn the hit into runs as the Lady Engineers outlasted the Lady Cavs, 2-0, in the championship game of the 14th Region Fastpitch Softball tournament.

This game was a pitchers’ duel, one of whom would make the least errors.

In the second inning, Estill drew a lead-off walk and Robinson followed with a run-scoring double.

In the fifth inning, Caitlynn Estevez led off with a single and courtesy runner McKenzie Gibson was moved around with sac bunts from Alexis Stambaugh and Whitney Creech, but was left stranded at third.

Jenkins made another threat in the sixth inning. With two outs, Melissa Bartley and Mercedes Boggs singled, but the Lady Cavs couldn’t get them across.

In the bottom of the sixth, Estill got an insurance run by getting a runner to first on a throwing error before Rollins tripled to make the final score 2-0.

The Lady Cavs finished up a great year at 30-8.

The 14th Region Softball Tournament began May 27 with four games.

In the last game of the night, Jenkins came up with a 7-1 win over Hazard.

In the bottom of the first inning, the Lady Cavs put two runs on the board. Brittany Mullins reached base on a throwing error and Melissa Bartley singled Both runners moved ahead and Mullins came in and score on a passed ball. Mercedes Boggs hit into a fielder’s choice to score Bartley.

In the second inning, Whitney Creech laid down a bunt single, stole second and third, and score on a throwing error. Mackenzie Gibson reached base on a fielder’s choice. She was moved around and Brittany Mullins bunted to score Gibson. Melissa Bartley hit an in-the-park homerun to center, scoring Mullins and making the score 6-0.

In the third inning, Whitney Creech bunted a single, stole second and third, and once again scored on a throwing error, making the score 7-0.

In the top of the fifth, Hazard got a runner on with a walk then got a base hit, and Jenkins committed a throwing error that moved the runners forward. One run scored on a wild pitch to make the final score 7-1.

Jenkins had seven runs on eight hits. Hazard had one run on four hits. Caitlynn Estevez had nine strikeouts.

In the semi-finals of the 14th Region, in the first game of the night, Estill County defeated Perry Central 9-2. In the second game, Jenkins played Powell County in a game that lasted three hours.

In the bottom of the first, Powell jumped out early with a base hit, a walk, an error, a single, a fielder’s choice, a walk, and another single. Powell sent ending nine batters to the plate and scored four runs.

In the third inning, the Lady Cavs came to life. With two outs, Melissa Bartley got hit by a pitch, Mercedes Boggs singled, and Charity Niece singled to score Bartley. Caitlynn Estevez helped herself out with a single to score Boggs and courtesy runner Rachel Spangler. Alexis Stambaugh singled, followed by Whitney Creech to load the bases. Ally De- Priest then doubled to left, scoring courtesy runner Taylor Johnson and Stambaugh. Ashley Niece got a walk and Brittany Mullins got an infield single to score Creech. Melissa Bartley reached base on an error, scoring Ally DePriest. Jenkins sent 13 batters to the plate, scoring seven runs and taking a 7-4 lead.

In the bottom half of the inning, Powell County answered. They loaded the bases with two outs, getting a single and back-to-back walks. A two-run hit followed by a walk loaded the bases again. A walk scored another run and after another two-hit run Powell resumed the lead 9-7 after three innings.

In the fourth inning, Charity Niece and Alexis Stambaugh both received walks, and Whitney Creech tripled, scoring both runners. Ally DePriest got a walk and continued running to second, causing the pitcher to make an errant throw to second, which scored Creech. The Lady Cavs reclaimed the lead 10-9.

In the bottom of the fourth, Powell tied the game on a single. The runner advanced on a fielding error and scored on a throwing error.

In the fifth inning, with one out, Mercedes Boggs tripled to left. Charity Niece received a walk and stole second, and Caitlynn Estevez drove Boggs and Niece in with a single to center. Alexis Stambaugh was hit by a pitch and Whitney Creech bunted single to load the bases, but they were left stranded.

In the sixth inning, Brittany Mullins lead off with a single, Melissa Bartley walked, Mercedes Boggs singled, and Charity Niece hit a sac fly to score Mullins and make the score 13-10. Powell added a run on a single, two walks, and a passed ball.

In the seventh, with two outs, Brittany Mullins and Melissa Bartley both reached base and then scored on a triple to left from Mercedes Boggs. Charity Niece singled to bring in Boggs and make the final score 16-11 to set up the championship game against Estill County.