Lady Cavs off to impressive start 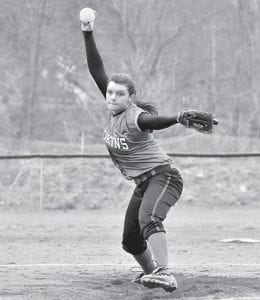 Jenkins High School senior Brooke Webb has taken the reins of the starting pitcher for the Lady Cavs as they look to defend their 53rd District title. Webb is seen here delivering a pitch in the Lady Cavs’ 12-2 win over East Ridge last week. Webb gave up one earned run and struck out six batters in the game. (Photo by Chris Anderson)

The Jenkins Lady Cavs softball team opened the 2010 season at home on March 24 with an impressive 12-2 win against the Lady Warriors of East Ridge.

Both teams started slowly, with the Lady Cavs scoring the first run in the bottom of the third when centerfielder Ali Goff led off the inning with a walk, stole second, advanced to third on a ground ball by right fielder Sarah Belcher and then tagged and scored on a sacrifice fly by first baseman Alexis Watts.

A walk to second baseman Leisha Fleming and base hits by third baseman Kayla Stambaugh and Belcher loaded the bases with one out. A Lady Warrior error later scored Stambaugh and a second run then scored when shortstop Emily Walker was hit by a pitch with the bases loaded. The third and final run of the inning resulted from an RBI single by DH Sierra Kiser that scored Belcher.

After holding the Lady Warriors scoreless in the top of the sixth, the Lady Cavs broke the game open in the bottom of the sixth scoring with eight runs to take a 10 run lead and end the game early after six innings. The Lady Cavs sent 11 batters to the plate in the inning while collecting five base hits and two walks in conjunction with two Lady Warrior errors to end the game.

Senior pitcher Brooke Webb turned in a strong performance as the starting pitcher, giving up three base hits, two walks, and no earned runs in six innings while striking out six.

The Lady Cavs traveled to Wise, Va., on March 25 to play the Lady Indians of J.J. Kelly High School. The Lady Cavs played well, taking a 14-0 victory in a game that was played on a wet, sloppy field during a steady drizzle.

Lady Cav batters pounded out 15 hits with every batter in the lineup reaching base safely at least twice, and eight diff erent batters scoring runs. The off ensive attack was led by Webb who collected four hits and scored three runs, and junior DH Sierra Kiser who collected three hits and four RBI’s including a three-run homerun over the centerfield fence in the sixth inning. Senior pitcher Brooke Webb hurled a complete game shutout giving up only three hits and walking none while striking out 14 Lady Indian batters to seal the second win of the season for the Lady Cavs.

On March 26, the Lady Cavs traveled to Danville to participate in the Danville Invitational Tournament. The first game for the Lady Cavs was against the Lady Indians of Covington Holy Cross.

The Lady Cavs started slowly, falling behind 2-0 after the first inning as a result of a Lady Indian base hit and a Lady Cav error. The score remained the same until the bottom of the third inning when third baseman Kayla Stambaugh led off with a walk and later scored on a triple by shortstop Emily Walker. The Lady Indians picked up a third run in the top of the fourth inning to make the score 3-1.

First baseman Alexis Watts led off the bottom of the fourth with a double and later scored on an error to bring the score to 3-2 in favor of Holy Cross. The Lady Cavs rallied in the bottom of the fifth inning by loading the bases on another leadoff walk for Stambaugh, and base hits by centerfielder Ali Goff and shortstop Walker. Webb worked a full count walk to score Stambaugh, and Watts’s second base hit of the game drove in Goff and Walker to give the Lady Cavs their first lead of the game. The Lady Cavs added two more runs to make the final score 7-3 when pinch runner Mercedes Boggs and Watts scored on a Holy Cross error.

Immediately following the come-from-behind win over Holy Cross, the Lady Cavs advanced to play the tournament host Danville Lady Admirals. Sophomore Kayla Stambaugh proved that the Lady Cavs have more than one strong pitcher by striking out five in the process of hurling a no-hit shutout in a 2-0 Lady Cav win.

Danville pitcher Evie Fredrick was sharp as well, limiting the Lady Cavs to four hits and only two runs in a game that proved to be a classic pitcher’s duel. The Lady Cavs scored the game’s only runs in the third inning when Stambaugh reached on error and base hits by slappers Goff and Belcher loaded the bases. DH Sierra Kiser’s base hit drove in Stambaugh and Goff for the game’s only two runs. Two runs proved to be enough for the win, thanks to Stambaugh’s sparkling performance on the mound.

The third game of the tournament for the Lady Cavs took place Saturday afternoon (March 27) against the Lady Titans of Mercer County. The Lady Cavs started strong by scoring two runs in the top of the first with consecutive singles by Goff , Belcher, and Walker and a ground ball by Kiser. Mercer County notched a run in the bottom of the first inning to make the score 2-1.

The Lady Titans increased their lead, scoring three runs in the bottom of the third, collecting two base hits and taking advantage of a Lady Cav error. A line drive homerun from Brook Webb that cleared the centerfield fence in the top of the fourth and cut the Mercer County lead to one run.

In the top of the fifth, Emily Walker reached on an error and later scored on a single by Sierra Kiser to tie the score at 4-4. Mercer County batters then slugged three hits in the bottom of the fifth, including a long homerun to left field by pitcher Tabby Shewmaker to stretch the lead to 6-3.

A long double to the right field fence by Shewmaker in the bottom of the sixth drove in a run to make the score 7-4. Shewmaker shut out the Lady Cavs in the sixth and seventh innings to preserve the win for Mercer County and deal the Lady Cavs their first loss of the tournament and the season.

Immediately following the loss to Mercer County, the Lady Cavs took on the Lady Yellowjackets from Middlesboro in their final game of the tournament. The Lady Cavs jumped to early lead in the top of the first inning, scoring three runs on base hits by Belcher, Walker, and Kiser and a base-loaded walk to Webb.

While Lady Cav pitcher Webb held the Lady Jackets to two runs on three hits with three walks and five strikeouts, the Lady Cav batters poured it on, scoring six runs in the second, five runs in the third, and adding a final run in the top of the fourth resulting in lopsided 15-2 Lady Cav victory.

Led by Walker and Belcher who each collected four hits, every Lady Cav batter in the lineup had at least one base hit and scored at least one run in the impressive off ense show.

The Lady Cavs notched some impressive wins to end the first week of the season with a 5-1 record. They were in action again on Monday as they hosted the Lady Indians of J.J. Kelly in a rematch and then traveled to Knott County Central on March 30. They will travel to Brooksville to compete in the Weber Farms/Bracken County Invitational on April 2-3.