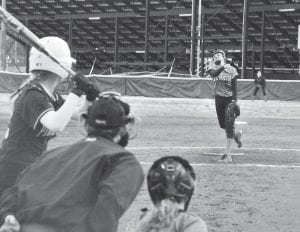 Jenkins pitcher Caitlynn Estevez delivered a pitch in the Lady Cavs’ road win over Pikeville last week by a score of 15-1. The Lady Cavs are still above .500 on the season after going winless in three games in a weekend tourney. (Photo by Chris Anderson)

After jumping to a 5-0 start, the Jenkins Lady Cavaliers dropped three games in a Lexington softball tournament to bring their record to 5-3.

The Lady Cavaliers got their fourth win last week when they traveled to the 15th Region to take on the Pikeville Lady Panthers. The Lady Cavaliers pounded out 21 hits to “mercy” Pikeville in 6 innings by a score of 15-1. Jenkins has a muchimproved defense and offense this season.

Pikeville’s only run came in the first inning and was unearned. Alexis Stambaugh went 5 for 5 with four doubles. Brittany Mullins went 4 for 5. Caitlynn Estevez picked up the win giving up two hits, nine walks, and five strikeouts.

In a 14th Region matchup, Jenkins took on Perry County Central at home and picked up their fifth win, 9-0. The Lady Cavs scored two in the first, two in the second, one each in the third and fourth, and three in the sixth. Brittany Mullins went 2 for 4 and Mercedes Boggs went 2 for 3, both girls had a double and Boggs had 2 RBI’s. Caitlynn Estevez picked up a great win with a no-hit shut out. She gave up four walks and recorded eight strikeouts. 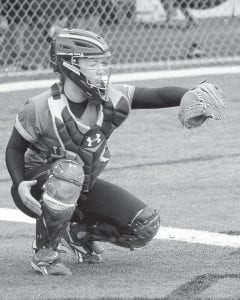 Catcher Charity Niece has helped the Jenkins Lady Cavaliers get off to a strong 5-3 start in the young softball season. (Photo by Paul Stambaugh)

On March 22, Jenkins traveled to Lexington to play in the Lexington Catholic turf tournament, facing Catholic in the first game.

In the first inning the Lady Knights put five runs on the board on two hits, four walks, a hit batter, and a Jenkins error. Catholic picked up another run in the third, and two more in the fifth. The Lady Cavs went hitless while picking up their first loss of the season, 8-0.

On March 23, the Lady Cavs played Grant County in the tourney. Jenkins fell behind in the first, 3-0, on four walks, a hit batter, and an error. Jenkins scored two runs in the second with doubles by Caitlynn Estevez and Alexis Stambaugh, a single by Whitney Creech, and a sacrifice fly by Ashley Niece.

Grant County scored three runs in the top of the fifth inning to take a 7-2 lead. In the bottom of the fifth, Jenkins came to life with four hits by Brittany Mullins, Melissa Bartley, Alexis Stambaugh and Ally DePriest while scoring four more runs. Still, the Lady Cavs came up just short, 7-6. Mullins, Stambaugh, and Estevez each had a double. Stambaugh went 2 for 3 with an RBI. Estevez gave up seven hits, eight walks, and had two strikeouts.

Jenkins rallied in the fourth inning with hits from Melissa Bartley and Mercedes Boggs, after which both girls stole bases and scored on fielder’s choices.

Jenkins came up short again, 4-2, leaving the season record at 5-3.