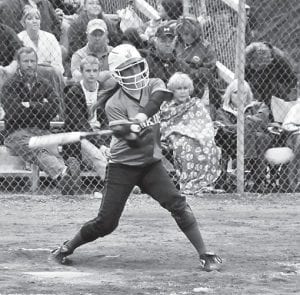 Jenkins Lady Cavalier Kayla Stambaugh connected with the softball while batting in a recent game. (Photo by Chris Anderson)

In the first game, Kayla Stambaugh took the mound against Pikeville. Jenkins struggled and played flat and could only come up with two hits from Kayla Stambaugh and Melissa Bartley. The Lady Cavs helped Pikeville with five walks, four errors, and giving up three unearned runs. Stambaugh only gave up two hits and had seven strikeouts, but Pikeville came out with the 5-0 win.

In the second game of the night, Caitlynn Estevez took the mound to face Paintsville. Paintsville did damage, scoring eight runs in the first two innings off of nine hits and a Jenkins error. The Lady Cavs did not come to life until the fourth inning with Paintsville committing an error and two hits from Mercedes Boggs and Randee Phillips scoring three runs. Jenkins added another run in the sixth with Mercedes Boggs reaching base on an error, stealing second and third, and being driven in on a fielder’s choice by Ashley Wright. Jenkins fell to Paintsville 8-4.

In the second game of the day on Saturday, Jenkins faced off against Letcher County Central. Caitlynn Estevez took the mound for the Lady Cavs as LCC stepped up to the plate.

The Lady Cougars started off with two singles driven in by a double from K. Creech. In the bottom half of the first, Kayla Stambaugh led off with a single, and stole second and third. Mercedes Boggs brought her in on a fielder’s choice. Melissa Bartley reached first on an error and was brought home on a single by Randee Phillips to make the score 2-2.

In the fourth inning, Kayla Stambaugh took the mound for Jenkins. Coots got a double for LCC and Makayley Johnson singled to bring in Coots to cut the lead 5-3.

In the fifth inning, Mercedes Boggs singled and stole second, and Randee Phillips reached first on a fielding error, scoring Boggs to put Jenkins up 6-3.

Jenkins had two wins and two losses for the tourney, and Letcher County Central had a win against Shelby Valley and three losses.