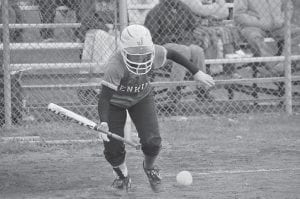 Jenkins senior Emily Walker led the way in the Lady Cavaliers’ victory over Harlan County last week, going two for three at the plate with a pair of singles and three runs scored. She is seen here laying down a bunt in the victory, which improved the Lady Cavs to 13-2 on the season. (Photo by Chris Anderson)

The Lady Cavs played four games last week and picked up four wins in the process.

April 6, they traveled to Virginia to take on the Lady Green Wave from Clintwood. The Lady Cavs took an early 1-0 lead in the top of the first inning when shortstop Emily Walker reached on error and later scored on a base hit by first baseman Alexis Watts. After a scoreless innings in the second and third, the Lady Cav lead grew to 2-0 on a base hit by pitcher Brooke Webb and back-to-back ground balls by Tazsha Hall and Leshia Fleming in the top of the fourth.

The lead stretched to 3-0 in the top of the sixth when Fleming reached safely with a base hit, advanced to second on a base hit by centerfielder Ali Goff , and scored on a ground ball by Walker. Clintwood rallied to score two runs in the bottom of the sixth cutting the lead to 3-2 as a result of a walk, a Lady Cav error and an RBI single by Lady Wave pitcher Vanessa Cumbo. 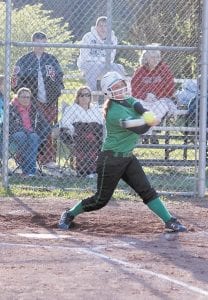 Alexis Watts connected her bat with the softball for a thirdinning double in the Lady Cavs’ win over Harlan County.

Webb gave up two runs on three hits and two walks while overpowering the Lady Wave batters for 16 strikeouts.

The Lady Cavs swept a doubleheader against an outmanned Cordia team with 21-0 and 22-4 wins when the Lady Lions visited Jenkins for a district matchup on April 7. In the first game the Lady Cav off ense pounded 20 bases to score 21 runs hits, led by Kiser with four base hits and two RBI and Stambaugh with three base hits and four RBI in a shortened three-inning game. Webb shut out the Lady Lion batters, allowing only one hit and striking out eight.

The nightcap of doubleheader was a game in which many of the Lady Cav starters were rested. The Lady Lions took an early 3-0 lead in the top of the first, but the Lady Cavs responded with a balanced offensive outing that resulted in another shortened three-inning game with the Lady Cavs on top by a final score of 22-4. The offensive attack was led by third baseman Allie Depriest who scored four runs, second baseman Mercedes Boggs with three runs scored and three RBI, pitcher Kayla Stambaugh with three runs scored and four RBI, and right fielder Brittany Mullins with two base hits and four RBI.

Stambaugh gave up three hits, no walks, and struck out five to earn the win.

The Lady Bears of Harlan County came to Jenkins on April 9 for an exciting backand forth game that found the Lady Cavs trailing in the fourth inning.

The Lady Bears rallied with a big inning in the top of the fourth to score seven runs to take a 7-6 lead. The Lady Bears collected three hits and took advantage of four walks and a Lady Cav error to take the lead.

The Lady Bears collected two base hits and took advantage of a Lady Cav error to score a run in the top of the sixth and tie the score 8-8. The bottom of the sixth yielded another lead change when the Lady Cavs scored twice to take a 10-8 lead heading into the seventh inning on singles by Belcher, Walker, and Stambaugh, sandwiched around a Lady Bear error.

The Lady Bears threatened in the top of the seventh, placing runners on first and second with one out as a result of a Lady Cav error and a walk. The Lady Cav defense stiffened, recording consecutive ground ball outs to squelch the Lady Bear rally ending the game for a hardfought 10-8 Lady Cav victory.

After the Harlan County victory, the Lady Cav record stands at 13 wins and 2 losses. The Lady Cavs were scheduled to open play in the All ‘A’ Classic 14th Region Tournament at Hyden against Leslie County on Tuesday, April 13. The semifinals and finals of the tournament will be held at Cordia on April 15 and 16. The Lady Cavs will also be in action today (Wednesday) at Whitesburg against the cross county rival Letcher County Central Lady Cougars.