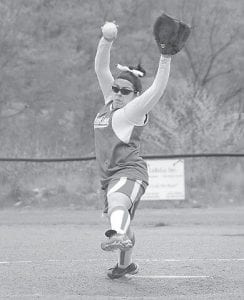 Girls’ fast-pitch softball action will be in full swing again this week, beginning with a match in Jenkins tonight (Wednesday) between the Lady Cavs and Letcher County Central.

The Lady Cougars played only one game last week, traveling to Leslie County on Friday, where they defeated the Lady Eagles 14-6. Letcher Central will resume a regular schedule this week, now that CATS testing is finished.

The Lady Cavs defeated Knott County Central last week before falling to Middlesboro in the All “A” Sectional. They rebounded this week with a win over South Floyd.

Eight Jenkins hits and five errors by the Lady Raiders of South Floyd helped the Lady Cavs to the 14-0 win at home Monday evening. Brooke Webb and Sarah Belcher each had a pair of hits in the game-Webb with two singles and Belcher with a single and a double. Rachel Thacker walked one and gave up two hits while striking out eight in the game. She and her catcher, Hillary Brashear, each contributed three RBI for Jenkins.

The Lady Cougars long trip to Leslie County last Friday paid off with a win against the Lady Eagles. Micca Boggs led the way with a homer to straight-away center in the third and two triples in her four for four, five RBI performance. Teammates Lisa Frazier and Courtney Johnson each went three for four with three singles, while Chloe Wynn and Kayla Burton each had a pair of hits.

This game went south for Jenkins in the top of the third inning when Middlesboro scored four runs on three hits, a walk, and two errors before batting around in the fourth, scoring another five runs. The only real noise the Jenkins offense made came in the bottom of the seventh when Kayla Stambaugh singled and stole two bases. She later scored on teammate Tazshia Hall’s sacrifice. Sarah Belcher and Emily Walker singled but any hope of a rally ended as Middlesboro stopped the offense and took the All “A” tournament berth from an unusually flat Lady Cavaliers team.

The Lady Cavs mustered only six hits in the game. Sarah Belcher and Kayla Stambaugh each singled, and Rachel Thacker had a double. Emily Walker had a good day at the plate, going three for four with three singles and two stolen bases. Jenkins committed seven errors in the game. Middlesboro collected 12 hits.

The Lady Cavaliers scored 15 runs in the second inning of a game which saw all Jenkins players score a run in the rout of district foe Knott Central. The offensive charge was led by Jenkins catcher Hillary Brashear, whose two for three day included a single and a triple. She stole a base, scored two runs and led her team with four RBIs on the day. Teammate Brooke Webb had three RBIs with her two singles. Jenkins pitcher Rachel Thacker was near perfect on the day, surrendering only one hit – a double – and a walk, both in the bottom of the third. She struck out five and helped herself at the plate with a single and a triple.